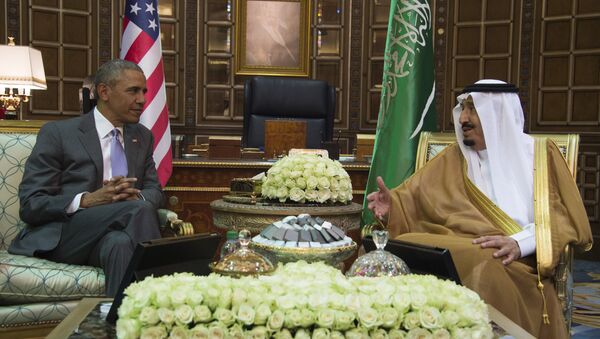 John Wight
All materials
Probably the most noxious aspect of the nauseating hypocrisy that feeds the oft-repeated assertion that the US and its western allies exist to uphold, protect and spread democracy and human rights, is the close alliance of said states and governments with Saudi Arabia.

Indeed, if the religious extremism that has engulfed the Middle East in recent years is a snake, responsible for the most heinous and wanton acts of brutality and barbarity the region has experienced in modern times, its head is in Riyadh.

US Scales Back Saudi Cooperation as Pressure Builds on West to Ditch Riyadh
This is not to argue that Saudi Arabia should be lined up for invasion and occupation — surely we've seen enough of such invasions and occupations to know they only make the situation worse rather than better. But it does require that countries such as the US, UK, and France reappraise foreign policies that have long placed an emphasis on maintaining close relations with a state that has done more to destabilize the region than any other.

Adding insult to injury when it comes to the Kingdom of Saudi Arabia and the Wahhabi Sunni fundamentalism that makes up its theological foundations, was the decision of the UN General Assembly in 2013 to elect Saudi Arabia as a member of the body's 47-member Human Rights Council, whose remit is to promote human rights across the world. The term on the council is three years, which means that Saudi Arabia's place is up for re-election this year, resulting in calls to block it serving a second consecutive term.

In 2016, it is self-evident that associating human rights with a country in which public beheadings take place with alarming frequency, in which women are regarded and treated as chattel, in which migrant workers are treated so inhumanely, which embarked in 2015 on a military campaign in neighboring Yemen, and in which war crimes have been routinely committed, is both grotesque and perverse. 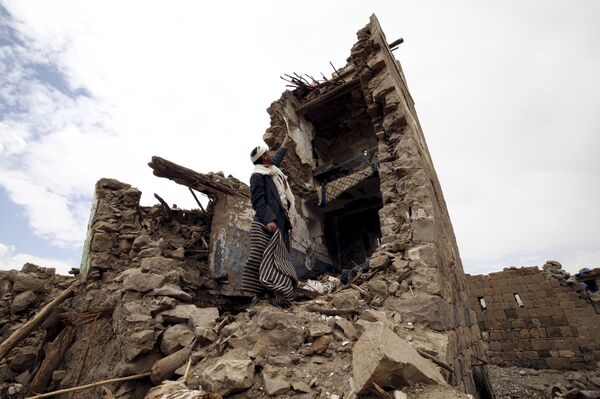 A man points up at a house that was damaged during an airstrike carried out by the Saudi-led coalition in Faj Attan village, Sanaa, Yemen May 7, 2015.
© REUTERS / Mohamed al-Sayaghi

For Washington, London, and Paris, however, it has long been a case of "see no evil, hear no evil" — the reason being that democracy and human rights takes second place when it comes up against strategic and economic interests.

Read more about our legal challenge to make the UK #StopArmingSaudi: https://t.co/qCT7at2rEl #Yemen

Meanwhile, Riyadh is the world's biggest customer for UK arms sales, with orders amounting to 3.5 billion pounds (US$4.6 billion) since the start of 2015.

According to the UK-based Campaign Against the Arms Trade:

"The promotion of the sales over several decades, and the financial and practical support given to them by successive UK governments, has given succour to the undemocratic government of Saudi Arabia. This has a human rights record which makes it a 'country of concern' for the Foreign and Commonwealth Office. It treats women as second-class citizens and its immigrant workers appallingly. Selling arms to the Saudi government sends the message that the human rights of the Saudi people are of lesser concern than the commercial interests of BAE."

Amnesty International (AI) and Human Rights Watch (HRW) are currently spearheading a campaign to have Saudi Arabia suspended from the UN Human Rights Council over the previously mentioned war crimes they allege the Saudis have been committing in Yemen.

According to HRW: "Saudi Arabia, as the leader of the nine-nation coalition that began military operations against the Houthis in Yemen on March 26, 2015, has been implicated in numerous violations of international humanitarian law.

"Human Rights Watch and Amnesty International have documented 69 unlawful airstrikes by the coalition, some of which may amount to war crimes, killing at least 913 civilians and hitting homes, markets, hospitals, schools, civilian businesses, and mosques. The two organizations have also documented 19 attacks involving internationally banned cluster munitions, including in civilian areas.

"Saudi Arabia should be suspended from the Human Rights Council until it ends unlawful attacks in Yemen and conducts credible investigations that meet international standards or agrees to and cooperates with an independent international inquiry."

As British journalist Patrick Cockburn writes in his book "The Rise of Islamic State":

"The importance of Saudi Arabia in the rise and return of al-Qaeda is often misunderstood and understated."

He goes on to identify its role in the "propagating of Wahhabism, the fundamentalist, eighteenth-century version of Islam that imposes sharia law, relegates women to the status of second-class citizens, and regards Shia and Sufi Muslims as non-Muslims to be persecuted along with Christians and Jews."

Cockburn goes as far as to claim that Wahhabism has "many similarities with European fascism in the 1930s."

For too long there has been a marked reluctance on the part of Washington and its European allies to confront Riyadh, the main source of the chaos and mayhem that has engulfed the region in recent years and lodestar when it comes to the religious and sectarian fanaticism that has spread like a cancer.

It is a reluctance and failure that exposes the rhetoric they continually espouse on confronting and defeating terrorism as empty words.

Democracy and human rights are in truth optional extras that come below strategic and economic interests in the priorities of western governments and ideologues. They are words rolled out as weapons against enemies and rivals, and abandoned in the case of allies.