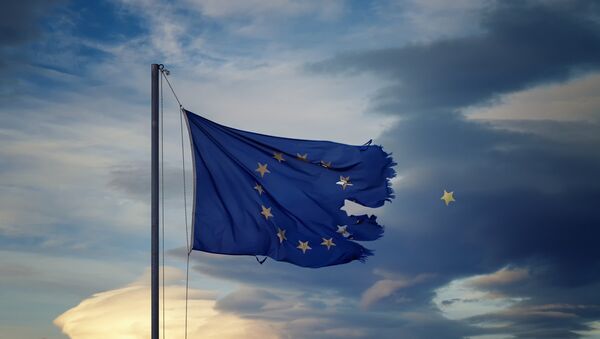 Two Years On: How Russia's Agricultural Sector Reaps the Benefits of Sanctions
In an interview with Sputnik, Tom van Grieken, chairman of the Flemish far-right party Vlaams Belang, did not rule out that a possible Brexit-like referendum in the Netherlands could result in the ultimate elimination of sanctions against Russia.

"I think that the anti-Russian sanctions are nonsense and that they should be scrapped as soon as possible. But this is not the main thing. The EU's main problem is that the bloc is out of line with democratic principles, and the EU's sanctions against Russia are evidence of this. We do not understand why we should impose sanctions on Russia," he said.

He also referred to an independent study conducted in the Netherlands two years ago, which showed that the country could benefit from a potential withdrawal from the EU. "I am convinced that it is quite possible to organize a Dutch referendum on the issue of Nexit," according to Van Grieken.

He was echoed by Jean-Luc Schaffhauser, a Member of the European Parliament from the National Front party, who told Sputnik that euroscepticism in on the rise in France and that many in France and beyond are opposed to the anti-Russian sanctions.

"Currently, many countries are up in arms against these anti-Russian sanctions. However, the current weak consensus  leads to a situation where we do not want to talk out loud about our opposition to sanctions with a number of other countries," he said.

Earlier in an interview with Sputnik, Moscow-based political analyst Konstantin Voronov said that the Dutch Party for Freedom's drive to hold a referendum on the Netherlands leaving the EU is a sign that it is time to start rethinking the European integration project.

#Auxit, #Brexit, #Dexit, #Frexit, #Grexit, #Nexit…
If any two of these vote to #LeaveEU and trigger #Article50 the #EU is finished.

He said that it is still unclear whether a national referendum will be held in the Netherlands, but that the very fact that the party has put forward this initiative is very symptomatic of disillusionment with the Union.

Party for Freedom leader Geert Wilders, meanwhile, said that "Brussels should not dictate who we can have economic and political relations with" and that "restoring ties with Russia is a priority direction for the traditionally trade oriented country which the Netherlands has always been."

"For centuries, our countries have benefited from bilateral cooperation despite conflicts. And today lifting the anti-Russian sanctions is a mandatory condition for our positive future," Wilders told the Russian newspaper Izvestia earlier this month.

Dutch Ukraine-EU Referendum Results Put a 'Nexit' on the Horizon
The European Union, the United States and some of their allies have introduced several rounds of anti-Russia sanctions since Crimea reunified with Russia in 2014, accusing Moscow of meddling in the Ukrainian conflict. Russia has repeatedly refuted the accusations, warning that the sanctions are counterproductive and undermine regional and global stability.

According to Ron van Dartel, the Dutch ambassador to Russia, the introduction of anti-Russian sanctions by the European Union in 2014 resulted in Dutch exports to Russia decreasing by one third and imports from Russia falling by about a quarter.

000000
Popular comments
If the EU is as free as the scoundrels in Brussels say, then all 27 remaining EU nations should have a referendum. Let the people of those nations vote about being in or out of the EU.
jas
23 August 2016, 09:58 GMT
000000
The EU is a good idea gone bad in practice. Since we have so much practical experience how not to build political unions (including russias experience ), I am confident we will get it right next time. The dutch will never leave the EU; after all who would eat all the tasteless tomatoes if not us ?