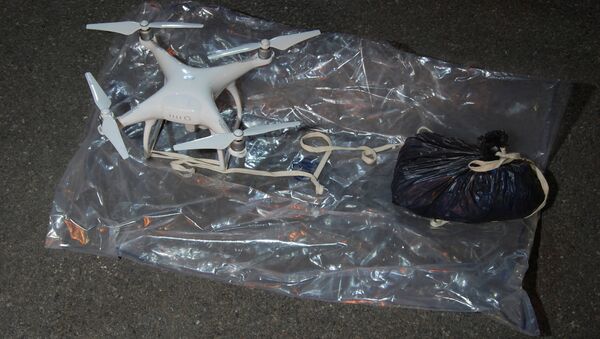 © REUTERS
Subscribe
Two drones that were carrying drugs and a mobile phone have been seized by police as they were trying to drop the goods off at Pentonville prison in London.

The illicit drugs were seized by the Metropolitan police while the drone was mid-flight. The Police intercepted the drone that was making its way to the north London prison. Another drone was also recovered earlier the same day after crashing near the category B/C jail which houses 1,250 inmates.

​Detective Chief Inspector Steve Heatley, said that the drones were carrying a substantial amount of Class B drugs.

"These recovered drones carried a substantial amount of Class B drugs, legal highs and a large quantity of mobile phones; we are able to intercept them thanks to the vigilance of officers and the public. The Class B drugs included cannabis, amphetamines and barbiturates," Mr. Heatly said.

This is not the first time that a drone drug drop of this type has taken place, in a separate incident, a suspected attempt to deliver drones into Wandsworth prison, in southwest London, was foiled last week when police intercepted the delivery. The police were engaged in a fatal car crash, where both suspects who were thought to be flying the drone were killed.

Woman dies and man injured in police chase after they were suspected of flying drone into prison #TODAY https://t.co/fBnjCljrJl

​Wandsworth prison is a Category B facility, for those who do not require maximum security, but who still pose a large risk to the public.

One of the first recorded attempts to deliver contraband into a British prison took place last October, when staff at Bedford prison spotted a package in the netting above the perimeter wall.

Drones are increasingly being used, whether to capture footage or used in warfare to kill. So the use of drones to deliver contraband is not surprising. However, some are asking how the police will combat this problem.