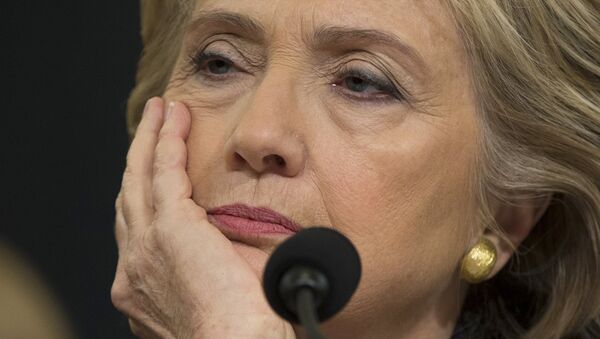 © AP Photo / Evan Vucci
Subscribe
International
India
Africa
Emails released by WikiLeaks revealed that Hillary Clinton admitted to suffering from decision fatigue and discussed with one of her top aides while serving as US secretary of state about taking a drug used to treat Parkinson’s disease.

Recovered Emails Show Clinton Top Aide Left Classified Documents in Car Seat
WASHINGTON (Sputnik) — Hillary Clinton admitted to suffering from decision fatigue and discussed with one of her top aides while serving as US secretary of state about taking a drug used to treat Parkinson’s disease, emails released by WikiLeaks revealed.

"Wow that is spooky descriptive," Clinton wrote in the email on August 19, 2011 to her close friend and senior adviser Cheryl Mills about an article entitled "Do You Suffer From Decision Fatigue?" released by WikiLeaks.

The article said individuals in positions of power could experience "decision fatigue" that could make them "become reckless" and "act impulsively." The article also warned that people suffering from the affliction could cause "ordinarily sensible people [to] get angry at colleagues."

Clinton’s alleged outbursts against some of her own staff have been reported to have reduced them to tears.

In a later email sent in October 2011 two months later, Clinton’s senior foreign policy advisor Jacob Sullivan informed her about a drug called Provigil (Modafinil) that is prescribed to treat "excessive sleepiness in patients with Parkinson’s, Alzheimer’s and multiple sclerosis," as well as "excessive sleepiness caused by narcolepsy."

The emails show Clinton being concerned about decision fatigue well before she fell and hit her head in 2012, which has caused a blood clot and additional worries about her health.

The releases come amid calls for both US major political parties’ presidential nominees to release their health records.

Rutgers University Professor of Medicine Bob Lahita has called on Clinton to agree to be medically examined by an impartial panel of physicians to ensure she is fit for office, according to media reports.