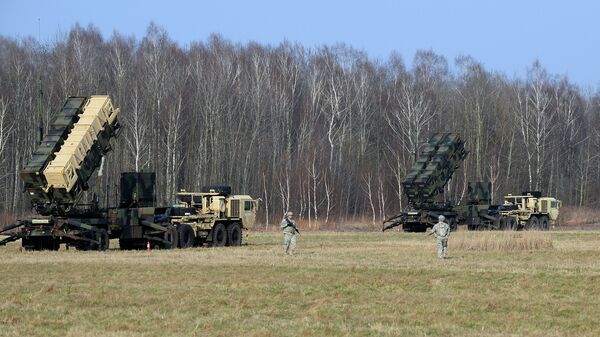 US defence contractors are encouraging anti-Russian rhetoric in order to maintain the military-industrial complex, former Pentagon official and senior security policy analyst in the office of the secretary of defence Michael Maloof told Radio Sputnik.

"Defense contractors and their leadership are actually encouraging anti-Russian rhetoric in order to increase business, and frankly, if we didn't have Russia the US military-industrial complex would have to create some demons in order to survive," Maloof said.

He told Sputnik that US military contractors want to maintain the high level of production they have enjoyed since the invasion of Iraq in 2003.

"Of course, this was a bonanza for the defence industry as a consequence. It was terrible policy, but it was financially rewarding for defence industries and now they've reached a certain level of income they can't diminish that, and they have to do what they can to spawn other conflicts throughout the world."

Daesh-Gate: The Scandal That Could End Hillary Clinton's Campaign
Maloof said that in 2003, the Iraqi government invited US troops to look for weapons of mass destruction there, as well as repeatedly denying US accusations that it was hiding the weapons. The government of neighbouring Syria also agreed to facilitate 5,000 US troops entering Iraq to search for WMD, in return for investment in the reconstruction of infrastructure.

"They also knew that if we invaded Iraq, that it would have a spillover effect in Syria, and look what happened. That has also now engendered greater business for the defence industries as well, so it's a never-ending cycle."

Maloof said that anti-Russian rhetoric of Democratic presidential candidate Hillary Clinton is a threat to relations between the two countries, as is her hawkish foreign policy.

"I'm very concerned that if Hillary Clinton gets in, the relationship between the US and Russia is going to be tarnished immediately because of the name-calling she's been doing, of President Putin first of all."

"It's a difference between someone is wedded to the past, in the case of Hillary, and someone like Donald Trump who says let's give peace a chance, if you will, and let's work on common interests rather than going for 'regime change,'" Maloof said.

If Trump is 'Russia's Candidate', Does That Make Clinton the Saudis' Pick?
Maloof, who has written a book called "A Nation Forsaken," said the US should focus more on humanitarian issues and reconstruction work, and cooperate more with other powers such as Russia.

"In Syria we should be working with the Russians for peace, and then help in the reconstruction of that country."

"President Assad has said that the priorities will go to Russians the Chinese and the Iranians, but we need have technologies too that could help out, but we need to be working together, and we're not doing that, we're working at cross-purposes."