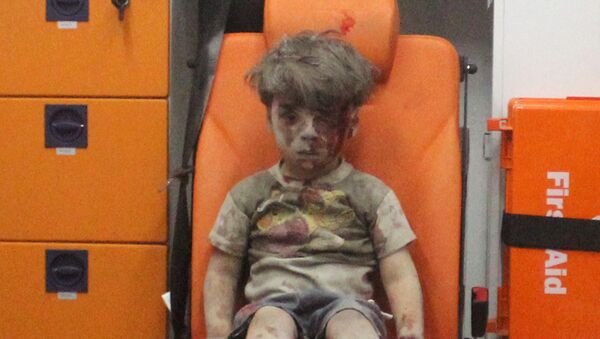 © REUTERS / Mahmoud Rslan
Subscribe
International
India
Africa
The shocking image of a bloodied and ash-covered boy who survived an airstrike in Syria has spread across the world, disturbing social media users and bringing news anchors to tears. But now, social media users are asking questions about the boy's photographer, believed to be connected to militants who beheaded a 12-year-old in Aleppo last month.

Earlier this week, social media users became fixated on the horrific image of a 5-year-old boy named Omran Daqneesh, pulled from the rubble following what was said to be an airstrike in Aleppo city's rebel-held district of Qaterji. The still from a video showing his rescue from the ruins of a building, featuring Omran seated, in shock, on an orange chair inside an ambulance, quickly went viral, appearing on the front page of dozens of newspapers around the world the next day. The story moved CNN anchor Kate Bolduan to tears.

Omran. Aylan. Those who don't make it to the front pages. What was done about it then, what will be done now? #Syria pic.twitter.com/nCPhqgpcXP

​The Russian military refuted the claims, Defense Ministry spokesman Maj. Gen. Igor Konashenkov stressing that Russian aircraft "never engage targets within the boundaries of settlements. This especially concerns the Qaterji district of Aleppo, which is directly adjacent to the two recently opened Russian humanitarian operation corridors for the safe exit of local residents."

Moreover, Konashenkov noted that a Defense Ministry analysis of the video of Omran's rescue "shows that if the strike did take place, it would come not from aircraft munitions, but a mine or a gas cylinder used in large numbers by the terrorists."

But while most Western mainstream media and many on social media may not trust the Russian Defense Ministry's explanations, one disturbing element behind the photo not reported in the press is beginning to grab the attention of many social media users.

Photos circulating online from the social media account Omran's photographer, a man by the name of Mahmoud Raslan, appear to show him commiserating with the killers of another child – 12-year-old named Abdullah Tayseer Issa, who was gruesomely beheaded by US-backed 'moderate rebels' last month.

​The photos, circulating on social media and collected by LiveLeak (warning, graphic images), show screenshots of Raslan's Facebook page, including an image showing him posing and smiling with the terrorists from the Nour al-Din al-Zenki Movement who murdered Issa in cold blood.

​Raslan provided Western media outlets with the harrowing details about his account, even penning a piece about it for The Telegraph titled 'I took the picture of little Omran in Aleppo'.

As photographer Mahmoud Raslan took this picture of #Omran, “the tears started to drop.” https://t.co/BaGFS10t8x pic.twitter.com/oIUGJNblNU

​Capturing the photo of the little boy brought him to tears, Raslan said. "Today when I woke up to see the whole world using the photo and talking about it I thought to myself, I hope all photos of children and attacks in Syria go viral so the world knows what life is like here," he added. "If people know what it is like maybe the war will stop, the bombing will stop."

​But the photo of Raslan in a very different situation, jubilantly posing with the killers of another child, has led to outrage among social media users, with some even suggesting that the photo of the shell-shocked little boy from Aleppo was staged. But while that seems unlikely, the photographer's apparent camaraderie with child-murdering Salafist terrorists does question the sincerity of his claim about wishing to end the plight of Aleppo's children.

Is that a journalist or a captagon fueled terrorist? This is Mr Raslan, the man who took Omran's viral photo. #Syria pic.twitter.com/HpbdgBBRN1