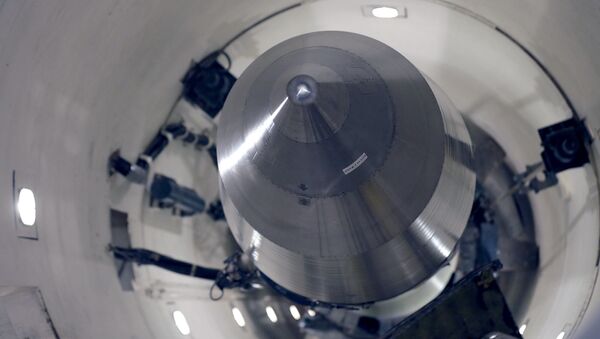 © AP Photo / Charlie Riedel
Subscribe
Earlier this week, US media reported that the development of America's new intercontinental ballistic missiles had been suspended, with the Pentagon citing costs that were billions of dollars above initial estimates. According to experts, the scandal is just the latest case in a long line of wasteful spending decisions by officials and arms makers.

On Tuesday, Bloomberg reported that the US Air Force's program to develop a new ICBM to replace the aging Minuteman III was effectively stalled, with the Pentagon concerned that the Air Force had underestimated the expected cost to develop and deploy the weapons by several billion dollars.

Declassified Documents Reveal US Planned Covert Nuclear Deployments in Iceland
Last year, the Air Force estimated that the development of up to 400 new missiles, along with the necessary command and control systems and other infrastructure, would cost the government about $62.3 billion. But earlier this month, an independent cost assessment report by the Pentagon's Defense Acquisition Board concluded that that figure was underestimated by billions. This was highly concerning, according to the news agency, given that the United States already plans to spend over a trillion dollars modernizing its nuclear forces over the next thirty years.

Bloomberg explained that the discrepancy in costs has to do with the fact that the United States has not engaged in the development of new strategic missiles in decades, with the resumption of such work expected to cost significantly more than initially estimated.

Commenting on the scandal over the missile's cost in an analysis for the online news and analysis platform PolitRussia, journalist Boris Stepnov emphasized that underestimating costs out-of-control spending was a regular occurrence in the US military-industrial complex.

For example, the journalist recalled that "price of the F-35 fighter jet, which so far has only brought losses for the US budget, and will be combat ready only in 2022, has already exceeded $110 billion. Meanwhile, the plane's testing has not borne out the capabilities once expected from the machine, with the US Air Force forced to continually lower the bar…The final testing of the plane has been moved back again, this time to 2018, and even the famous American hawkish Senator John McCain has called the project a failure."

Too Much Power: Pentagon's Supergun Has a Super Weak Spot
A similar situation is plaguing the US Navy, Stepnov noted. "The story of failures and money being siphoned off is illustrated very clearly by the innovative new destroyer project Zumwalt, the costs of which have already reached those of an aircraft carrier."

Ultimately, the journalist suggested that the stories surrounding the high costs of new US weapons systems demonstrate that pouring huge amounts of money into something doesn't guarantee results. The US military, he wrote, "had long intimidated the world with its high-tech, high-precision weapons, with its colossal military budget, etc. But while one cannot deny that this is the case, it's also necessary to see through the PR to the actual state of affairs: corruption, rent-seeking behavior, etc., which not only greatly increases costs, but leads to the creation of systems that don't necessarily offer any practical use."

Last week, former US Secretary of Defense William Perry slammed the Pentagon's plan to modernize the US's nuclear deterrent, not only because it amounts to "starting a new nuclear arms race," but also because "we are talking about huge expenditures here [which are] hardly being discussed or debated…"

As to the costs of the program, Perry told Sputnik that the reality is that "nobody really knows what the cost is…but people drop figures like $1 trillion. But I don't know what the right number is – if anything [$1 trillion] is on the low side."

As for the US's current ground-based ICBM, the LGM-30 Minuteman III is concerned, Stepnov noted that it is a formidable, but aging weapon.

Eyes on the East: US Air Force Bombers Fly First Concurrent Pacific Operation
The solid-fuel rocket has a range of up to 13,000 km, and can accommodate up to three warheads. In 2003, the US reequipped the missile with a monoblock 457 kiloton warhead, using the vacant mass for additional subsystems aimed at overcoming missile defense. The last modification, designed in 2008, saw the missile equipped with a new guidance system by Northrop Grumman.

"Of course," the journalist noted, "the US has made an effort to show that everything is alright with their Minuteman. Thus a demonstration launch was conducted in February. According to Deputy Defense Secretary Robert Work, this action was meant to demonstrate the capabilities of the American nuclear arsenal to Russia and China, and most importantly, to frighten Kim Jong-un." 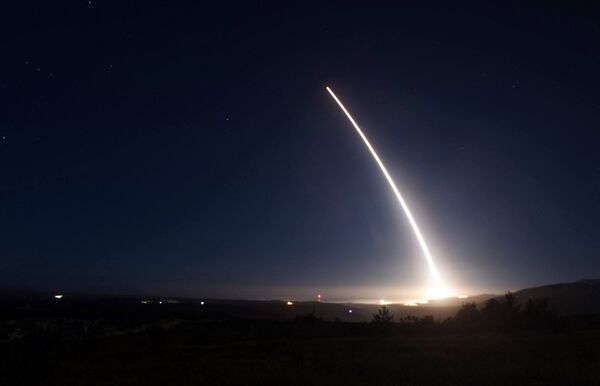 In any case, Stepnov added, "the demonstration launch was a matter of advertising for domestic audiences, meant to lift Americans' sense of patriotism and faith in the military –to tell them that all of America's possible opponents are aware of the existence of the Minuteman," and its capabilities.

Nevertheless, in an age when strategic weapons systems are being equipped with components and technologies allowing them to maneuver against missile defense, the Minuteman gradually risks falling far behind. "Ulike the Yars, the Rubezh, and the Bulava, the Minuteman is not able to maneuver in the take-off stage; it's been said that intercepting the Russian missiles will require up to fifty interceptors, whereas intercepting a Minuteman needs only a pair of missiles…Even the Soviet-era R-36, [NATO codenamed] 'Satan', is capable of deploying false targets, and can carry up to ten warheads, although it too cannot maneuver on start. And Russia already has the 'Satan 2' on the way."

Nuclear Modernization Ranked in Top 25 Most Costly Acquisition Programs
Meanwhile, the journalist noted, the Pentagon had been promising to calculate the requirements for the Minuteman's replacement since the early 2010s. "It was said at the time that this work would be concluded by 2013…"

"At the same time, the Pentagon has said that it would like to obtain funding for a variety of different projects. For example, last year, the Air Force presented a project for an above-ground missile complex in the form of a 'nuclear train', which would move around a network of underground tunnels, its rockets launching through a special shaft in the tunnel. This was suggested in spite of the fact that the US been unable to develop even an analogue to the [Soviet-era] Molodets rail-based missile system, much less its successor, the Barguzin." Not surprisingly, Stepnov noted, this program too was eventually shot down by the Air Force.

"Naturally, the United States will not remain without land-based ICBMs. But so long as they continue to spend a great deal of time and just as much money developing something more modern, the old Minutemen, introduced into combat duty in 1978, will continue to stand guard," Stepnov concluded.