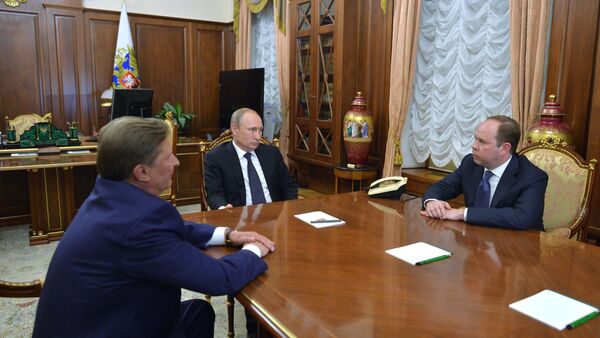 The resurgence of Cold War style McCarthyism and anti-Russian propaganda has finally shifted gears from the insulting to the downright comical science fiction.

Last week, Russian President Vladimir Putin’s long-time Chief of Staff Sergei Ivanov resigned to pursue a post leading the country’s environmental policy, a matter dear to the official that Putin had once called one of the five people he most trusted after Ivanov spearheaded a successful project to save endangered tigers, paving the way for his protégé Anton Vaino to take command as the Russian President’s top aide.

Controversy first surrounded claims that Ivanov did not resign, made of whole cloth by Western media outlets seeking their next clickbait conspiracy, but was rather removed so that Putin could consolidate power in the Kremlin. Of course, this ignores rumors for over two years that Ivanov was planning on resigning as his health began to wane following the tragic drowning of his young son.

But then, almost out of nowhere, the media latched on to what may become the sci-fi thriller of the summer, with some outlets already touting it as Vladimir Putin’s secret mind melting weapon, the mysterious and ever enchanting “nooscope.”

ABC News first broke the story that somebody listed as "A. Vaino" co-authored an article entitled "Capitalization of the Future" published in the Russian academic journal, Questions of Economics & Law which spoke about the creation of a new device capable of reading the "code of the market" called the Nooscope.

The best way to explain the Nooscope is to refer to the article itself, now patented 50 times, which states that "the Nooscope is a device for recording changes in the Noosphere" with the device apparently consisting of "spatial sensors" capable of making "the invisible visible."

The goal of the device, according to the article, is to "allow the study of humanity’s collective consciousness.” The idea traces back to the Russian thinker Vladimir Vernadsky who opined that the "Noosphere" is the "third stage in Earth’s development, when humanity’s collective thought would affect the earth as a whole."

Of course, this article has yet to be traced to Anton Vaino, but rather only to an "A. Vaino" (which is not to say it necessarily isn’t him) with rather a large number of individuals bearing the last name and first initial based on even a cursory glance through social media, but that did not stop the immediate splurge of hysteria.

The New Yorker began to opine in the article "The Very Strange Writings of Putin’s New Chief of Staff" that the letters in Vaino’s name, if you misspell his name as the publication did, could be scrambled around to spell the Russian word for war – voyna. The publication then outlandishly asks "Is this the message that Putin is sending?"

The BBC went further to speak about "Kremlin spin doctors" while quoting a professor who called the concepts in the article "mythological." They also opined that Vaino was the second-coming of Vladislav Surkov who they quote a Russian politician as calling "a puppet master who privatized the political system." Yet, it didn’t stop there – the BBC sees the "Nooscope" as somehow linking Vaino in style and approach to Dmitry Kiselyov, the head of state-funded news agency Rossiya Segodnya, who they call in the article "the Kremlin’s chief propagandist."

At the end of the article, published on Friday, the BBC even admits that they do not know whether the author of the "Nooscope" piece is in fact Putin’s new Chief of Staff or just a similarly named individual, but that didn’t stop the 913 word rant that can only conceivably be described as actual state-funded propaganda.

The UK Daily Mail goes off on a similar tangent by first acknowledging that they don’t know whether the 44-year-old Anton Vaino is the author of the academic article before saying that Putin’s new chief of staff wants to "tap into the global consciousness and 'register changes in human activity'" and saying in their title that “Putin’s new right-hand man claims to have invested a gadget called the 'Nooscope' which is 'as big a breakthrough as the microscope' in order to "interpret and manage world events."

It seems there must not have been any good movies out this summer with the way the West is concocting conspiracy theories about Putin and Russia these days as a veritable pastime.