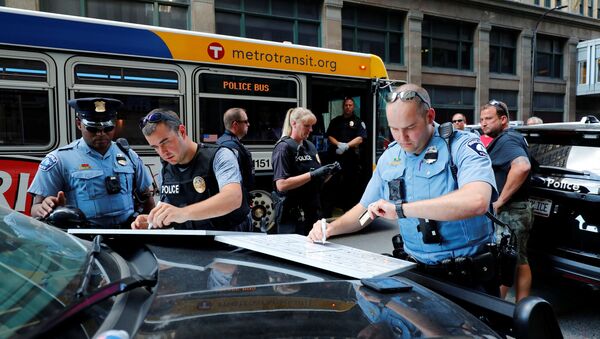 © REUTERS / Adam Bettcher
Subscribe
International
India
Africa
Anti-Trump protesters turned to violence during the Trump fundraiser at the Minneapolis Convention Center this Friday. What started as a “peaceful” protest turned into a complete mess overnight.

Trump Vows to Speak Up for ‘Forgotten’ People, Vets if Elected US President
According to Star Tribune report, the protesters who gathered at Minneapolis Convention Center Friday, August 19th, to show their disapproval of Donald Trump and his donors, turned to violent actions and started pushing and punching the attendees, spitting on and "verbally harassing" them.

The demonstration was organized by the Minnesota Immigrants Rights Action Committee and was supposed to be a peaceful action. And it was, for the most of the day. Then all hell broke loose closer to midnight, when the fundraiser had a late start.

"You've got somebody out there saying things that used to only be said in the shadows," one of the protesters told Star Tribune. "I think what he's saying represents something pretty dangerous for our country."

According to other media reports, "the later group of protesters hid their faces behind scarves."

The video footage shows protesters violently "confronting" the guests on their way in and out of the convention center.

Some of the protesters even attempted to block Trump's motorcade by standing in front of it and even jumping on top of it.