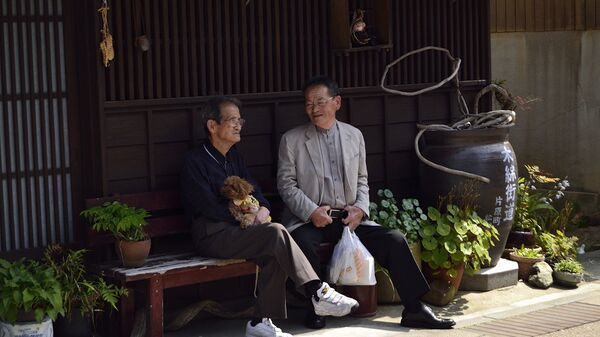 © Flickr / Giovanna Durgoni
Subscribe
International
India
Africa
As the population of Japan continues to age amid low total fertility rates and longer lifespans, it remains unclear exactly how the nation will care for its elderly as they come to represent a bigger and bigger proportion of society.

Bank of Japan Likely to Continue Stimulus After September Policy Review
A 19-year-old woman was arrested by Ciba City police this week on suspicion of attempted arson at a care facility for the elderly where she works part-time.

It should be noted that this incident occurred less than a month after former nursing home employee Satoshi Uematsu brutally murdered 19 residents of the facility.

Furthermore, Uematsu declared that he doesn’t regret his actions because he only wanted to 'save' sick people who suffer from multiple problems.

So were these two cases merely isolated incidents or could it be that they signify a dangerous new trend, that Japanese youth are beginning to consider the elderly as little more than a burden?

Viktor Pavlyatenko, senior research fellow for Japanese Studies at the Russian Academy of Sciences, told Sputnik that these incidents were nothing more that isolated cases. However, he stresses that this doesn’t mean that they should be ignored. He pointed out that these outbreaks of violence were the result of the psychological issues of their perpetrators, and shouldn’t be interpreted as a sign that young people in Japan are becoming more violent towards the elderly.

"However, the problem of the rapidly decreasing labor pool and, in turn, the rapidly increasing number of senior citizens does exist. The nation is aging much faster than any other developed country in the world, and caring for the elderly has become become a serious issue. However, all developed countries have to deal with this problem as well. Furthermore, many nations seek to increase the longevity of their citizens as it serves as a sign of high standards of living," Pavlyatenko explained.

Meanwhile, in 2013 the former Prime Minister and Japan’s current Finance Minister Taro Aso offered a rather bizarre way of dealing with the economy crisis.

According to Aso, allowing the elderly to die sooner would lighten the burden on the country’s social security system. The minister also added that he would’ve felt uncomfortable knowing that maintaining his fading life costs his nation a hefty sum.

Aso's statement was widely criticized by his colleagues and the minister was later compelled to apologize for his words.

According to Pavlyatenko, the public reaction to that statement shows that Japanese society is not as homogenous as some believe. He also remarked that politicians of

Taro Aso's rank should definitely pay close attention to the statements they make.

"Aso is a pragmatist – in a sense, he has to be a pragmatist as a minister of finance. Though I do hope that he didn’t quite understand what kind of reaction his statement would elicit," Pavlyatenko added.

Despite Japan having a total fertility rate (TFR) of only 1.41 births per woman as of 2012 and a population which has ebbed from its high of 127.8 million, the country's life expectancy has risen from an average of under 67 years in 1960 to over 83 years today.

While other developed countries with low fertility rates have relied on immigration to make up for dwindling populations, Japan's culture is averse to the arrival of outsiders.

It must be remembered that foreigners were forbidden from entering the country for over two centuries. According to Bloomberg, Japan’s population "is projected to shrink by about 500,000 a year during the next few decades. Canceling out that loss with immigration would mean importing almost 0.5 percent of Japan’s population a year."

According to a 2005 Economist article, "the consensus among Japanese is that visions of a future in which immigrant workers live harmoniously and unobtrusively in Japan are pure fancy." However, the Economist went on to suggest that non-threatening humanoid robots could fill the shoes of erstwhile immigrants in providing elder care.