Turkish President Erdogan Claims Daesh Could be Behind Gaziantep Bombing 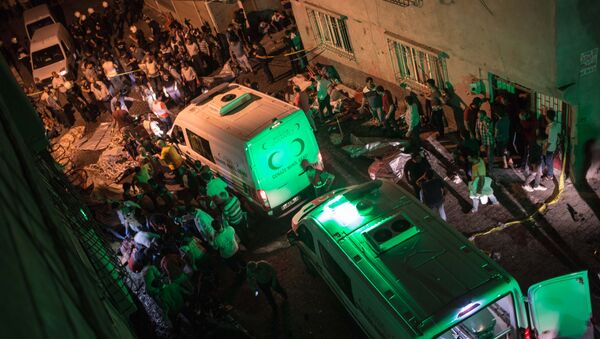 Turkish President Recep Tayyip Erdogan has suggested that the terror group Daesh could be behind the overnight bombing of a wedding in Gaziantep, in a statement published Sunday.

Terror in Turkey: Major Suicide Bomb Rocks Wedding - 30 Dead, 94 Injured
MOSCOW (Sputnik) — The president wished a speedy recovery to 94 people who were wounded in the bombing that shocked the mostly-Kurdish city in southeastern Turkey. The blast killed at least 30 people, according to the province's governor.

Erdogan claimed "there is no difference between Daesh, the likely perpetrator of the Gaziantep attack," the Kurdistan Workers' Party (PKK) and Muslim leader Fethullah Gulen, who Ankara accuses of masterminding the July 15 failed coup.