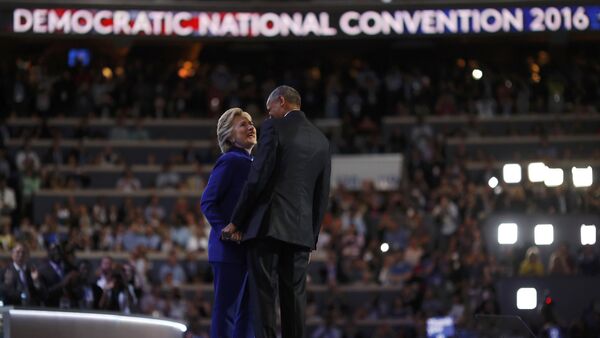 Russian-Israeli journalist and political analyst Israel Shamir offers his insights on why Trump's comments about Obama and Clinton being 'the founders of ISIS' may just put an end to Hillary Clinton's White House ambitions.

"Hillary Clinton, the candidate from the Democratic Party for the US presidency, is on easy street, or so it would seem," Shamir wrote, in a recent op-ed analysis for Svobodnaya Pressa.

"She has the reigning president on her side. She has the New York Times and the Washington Post on her side, along with the national television networks. It might seem that she's got this election locked up. And that might have been the case, a few years ago; no one would have even heard about her rival, Donald Trump. But now, in the age of networking technologies, things aren't as easy for her."

Poll: Clinton, Trump Tied Nationally in Race for White House
"The gadfly in her Garden of Eden turned out to be Julian Assange, the Australian hacker who has been locked up in the Ecuadorian Embassy in London for four years now. First he published the Democratic Party's email correspondence, showing that its leaders had conspired to get rid of Bernie Sanders. The chair of the party had to resign, and the man who appeared to leak the materials was found dead on a street in Washington. But Clinton proved capable of coming to an agreement with Sanders. He received good money, bought a new house, published a book, and joined with Clinton, calling on his supporters to vote for her."

"Then," the journalist noted, "Julian Assange unveiled more of Clinton's correspondence, declaring that it was Madame Clinton – during her time as Secretary of State, who supplied arms to Daesh (ISIL/ISIS), listed as a terrorist organization both in the US and in Europe. Furthermore, Assange said, she lied under oath when she told the Senate that she does not know anything about the supply of weapons to the terrorists."

"Assange's statements could have been silenced, but they were picked up on by Donald Trump. He accused Hillary Clinton and Barack Obama of creating Daesh, of being sympathetic to Daesh and its aims, of leading a phony war against the terrorist group, costing the American taxpayer a great deal of money, and bringing a tidy sum for Mrs. Clinton and her foundation."

Hillary’s Top Surrogate Accuses ‘Trump and His Friend Putin’ of ‘Founding ISIS’
"Michael Mcfaul," the former US ambassador to Russia, "accused Trump of articulating 'Putin's propaganda'. The Pentagon too was indignant; after ten thousand sorties against Daesh (or fifty thousand, according to some sources), they are still being accused of aiding the terrorists! A considerable scandal erupted. But Trump and Assange were right."

"The supply of weapons to Daesh and its creation happened like this. Secretary of State Clinton was able to convince Barack Obama (who it is said played a passive role in this story) to deliver weapons to the enemies of the governments in Syria and Libya. To this end, a huge cache of American weapons was sold to Qatar. The tiny Persian Gulf principality with a huge budget paid for the weapons and even transferred a large sum into the accounts of the Clinton Foundation. The weapons were sent to Islamist extremists in Benghazi in eastern Libya near Egypt. They were distributed there by small-time Egyptian thugs, and were then used to overthrow Gaddafi."

"After Gaddafi was toppled, the weapons were sent from Libya to Syria, and to the rebels there. Notably, Clinton and Obama had no doubt that the rebels were Islamist extremists with close ties to al-Qaeda. The top-secret dispatch from the Pentagon said point blank that the Al-Qaeda in Iraq (AQI) militants knew Syria well, and have been fighting against the Assad regime from the outset. Western countries, Turkey and the Gulf monarchies supported their plan to seize eastern Syria, where it would be possible to create a support base like the one that was set up in Benghazi, Libya. And that's how Daesh emerged in Syria."

Further, Shamir noted, "Obama and Clinton also contributed to the rise of Daesh in Iraq. While Iraq was occupied by US forces, under President George W. Bush, the Americans created a Shia government in Baghdad, inciting the Sunnis against it; then, under Clinton and Obama, the Americans left, leaving Sunni areas flooded with a sea of small arms and military equipment. All the Islamists had to do was climb into the American Hummers and raise their black flags."

Secret File Confirms Trump Claim: Obama, Hillary 'Founded ISIS' to Oust Assad
"Then, according to the dispatch published by Wikileaks, and used by Donald Trump, Daesh received weapons from the US. The arms were theoretically meant to be delivered to the so-called 'moderate opposition', but Washington knew that they were falling into the hands of Al-Qaeda [via its Syrian branch, the Nusra Front] and Daesh. The leader of the Daesh militants in Pakistan admitted to having received weapons from the US. And in this Trump was right to accuse Secretary of State Clinton and President Obama. 'They dream of Hillary Clinton', Trump said of the terrorist group."

In other words, Shamir noted, "before our eyes, the secret of the creation of this nest of terrorists and extremists is being revealed. We might have expected this, recalling that in their own time, the US filled Afghanistan with arms and brought the Islamists, along with bin Laden, to power in that country. At that time, Reagan was fighting the Soviet Union. Now, in Syria, Clinton and Obama are carrying out the will of the Israeli lobby, which dreams of eternal war in the Middle East. In Iraq and Syria, Washington is fighting Iranian influence."

Therefore, Shamir noted, for now at least, "Moscow's talk of joint efforts with the US against Daesh is just that – talk, even if it is necessary and useful. Not every truth should be laid out immediately, and the Kremlin understands this."

"Assange has promised to publish additional evidence linking Hillary Clinton to the supply of weapons to Daesh soon, even though a lot has been published already. Then, when this reaches the American electorate, they will yet be able to pull off a November surprise."

Ultimately, Shamir wrote, "the self-assured Mrs. Clinton and the Democratic establishment is more and more reminiscent of a 'collective Boris Godunov' [a Russian tsar in the late 16th century]. They consider themselves to be the anointed kings, and despise not only Trump, but his voters as well – the working and middle class. But more and more, the words of Pushkin come to mind: 'There may be a great disaster. Such a disaster that Boris will hardly hold the crown on his clever head.'"