I Can't Stand the Rain! Top German Military Vehicle Scared of Getting Wet 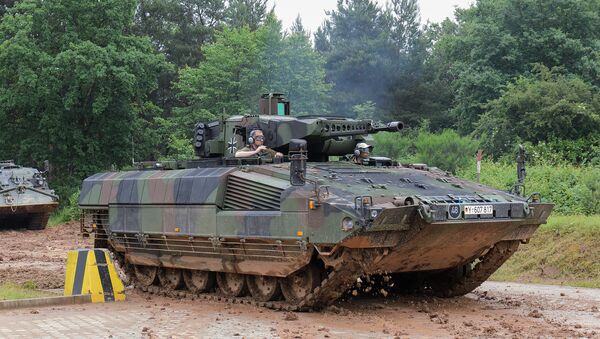 © Flickr / 270862
Subscribe
International
India
Africa
The German infantry fighting vehicle Puma, which is considered to be one of the best-protected armored vehicles in the world, has turned out to be vulnerable to rainwater.

New Polish Tank Anders Unlikely to Become 'Killer' of Russian Armata
The Puma, the pride of the German armed forces designed to replace the aging Marder IFVs, apparently has a minor but potentially dangerous defect – it's not watertight.

According to Süddeutsche Zeitung, the vehicle’s top hatch – namely, the "two-man hatch in the rear troop compartment" – cannot be hermetically sealed, so in case of a heavy rainfall water can literally penetrate the IFV’s defenses.

Rheinmetall AG, which handles the manufacturing of Puma together with Krauss-Maffei Wegmann, declared that "under real conditions of use it has been discovered that the roof hatch of the Puma infantry fighting vehicle requires improvement."

Indeed, the company had to develop a new insulation device and started installing it on the defective vehicles begining this spring, claiming that the problem has been isolated and solved. However, it remains unclear exactly how this defect avoided detection during factory trials.

It should be noted that this defect was in fact discovered by the German Defense Ministry back during the second quarter of 2015, and a "singular case" of a non-hermetically sealed Puma’s hatch occurred in 2013, the newspaper points out.

However, the ministry didn't bother to mention this defect in its latest report, claiming that it has a "relatively low impact on operational readiness."

"It remains to be seen whether the mechanized infantry soldiers will share this sentiment when autumn and rainy weather come," the newspaper remarks.