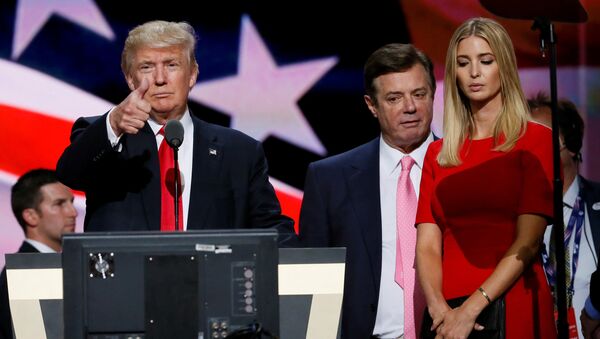 Ex-Trump advisor Paul Manafort is in trouble, accused of receiving millions of dollars from ex-Ukrainian President Viktor Yanukovych. But while the mainstream media continues to spin the Democratic Party's claim that the Trump campaign is in league with the Kremlin, citing Manafort as evidence, it won't change some very basic, but important facts.

Trump Campaign Chairman Paul Manafort Resigns - Statement
On Friday, Trump campaign manager Paul Manafort resigned, amid dropping poll numbers and suggestions from within the campaign that the change was meant to give the campaign a more serious tone. In a statement, Donald Trump said that the advisor offered the resignation himself, and he accepted, adding that was "very appreciative for [Manafort's] great work…in particular his work guiding us through the delegate and convention process."

Over the last couple weeks, the US media have been dragging Manafort through the mud, accusing him of accepting millions of dollars in off-the-books payments from former Ukrainian President Viktor Yanukovych's Party of Regions while working as an advisor to the head of state.

A theme prevalent throughout mainstream media coverage of the scandal has been the suggestion, accompanied by a collage of pictures of President Yanukovych alongside Russian President Vladimir Putin, that Manafort's role as an advisor to the Ukrainian politician was proof of his close ties to the Kremlin.

For example, in her coverage of the investigation into Manafort's alleged shady dealings, MSNBC host Rachel Maddow portentously suggested that Yanukovych, who was forced to resign and flee Ukraine in fear for his life following a coup d'état backed by Western officials in February 2014, was basically was a Kremlin stooge.

"Russia," Maddow claimed, had "installed" the Ukrainian "dictator" as a "Russia-friendly, Putin-friendly massively corrupt leader in Ukraine." And that 'dictator,' in Maddow's words, had close ties with Manafort, "an American political guru, who basically orchestrated Yanukovych's rise to power as Putin's guy as the president in Ukraine."

Trump Overhauls Presidential Campaign, Appoints Breitbart News Exec to Top Post
Several things are wrong with this picture. First, contrary to the claims of pundits including Maddow, Yanukovych was not a 'dictator'. He was elected with a plurality of the popular vote in a runoff election against former Prime Minister Yulia Tymoshenko in February 2010, after former pro-Western President Viktor Yushchenko was thrown out of the running with just 5% of the vote in the first round.

By early 2014, Yanukovych's popularity was slipping, thanks to political mismanagement and allegations of widespread corruption, but he did remain the internationally recognized president of Ukraine, before being forced out of office in an unconstitutional putsch known as the Maidan revolution.

But what's even more important to point out is that while Manafort's service as an advisor to the Ukrainian president is well documented (as has his career advising other foreign leaders from around the world), the claim that Yanukovych was "Putin's guy" is a stretch of the imagination so painful as to give political scientists who actually remember his presidency a headache.

Yanukovych, it should be remembered, did not change Ukraine's strategic course toward Russia, and only slightly modified his pro-Western predecessor's policy of seeking to integrate with the European Union and NATO. He gladly signed on to his predecessor's 2008 US-Ukraine Charter on Strategic Partnership, a document affirming Kiev and Washington's intent to be "strategic partners."

Shortly after his election in 2010, Yanukovych distanced himself from Yushchenko's policy aimed at joining NATO, but praised Kiev's relations with the alliance as "well defined." He even teased alliance officials, saying that Ukrainian membership in NATO could "emerge at some point, but we will not see it in the immediate future." Kiev and NATO continued their cooperation, including joint military exercises, throughout Yanukovych's term in office. 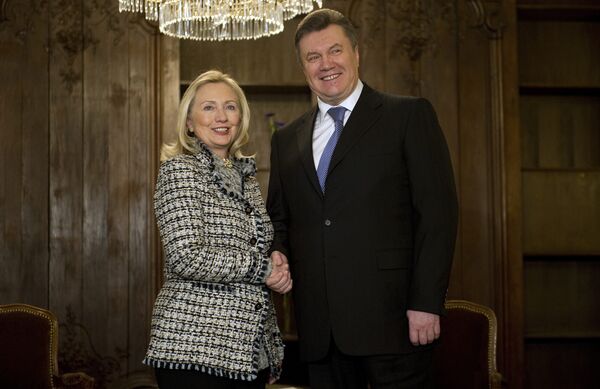 Visiting Ukraine in 2010, then-Secretary of State Hillary Clinton offered nothing but praise for Yanukovych, congratulating the president on his birthday, discussing "ways that Ukraine and the United States can deepen and expand our strategic partnership," and calling the president's recent election nothing less than "a major step in the consolidation of Ukraine's democracy."

US Media Hides Real Scandal, Says ‘Trump a Manchurian Candidate for Putin’
Three years later, in 2013, again under Yanukovych, EU and Ukrainian officials worked up a draft of the EU-Ukraine Association Agreement, a comprehensive political and economic association between Kiev and the supranational bloc of countries. Ironically, the Yanukovych government's fatal decision to stall the treaty's signing would be the catalyst for the street protests on Maidan Square in Kiev in late 2013, which would help end up overthrowing the president and his government in the winter of 2014. Still, it remains historical fact that Yanukovych was the one to agree to the treaty in the first place.

And here is where Paul Manafort's name comes in – or rather doesn't. Where, in the mainstream media's account of Manafort as advisor to "Putin's man in Kiev," do the consultant's 'pro-Russian' leanings pop up? Where do Yanukovych's, for that matter? Throughout his term president, Yanukovych attempted to walk the line between friendship with Russia and partnership relations with the West, something that made him little different from his moderate predecessors, including Leonid Kuchma.

Yanukovych was kicked out by radically pro-Western politicians in Ukraine who decided to throw caution to the wind and, with US and European officials' backing, attempted to rip Kiev completely out of Moscow's orbit in favor of total integration into Western institutions. But even a cursory analysis of his presidency makes clear that Yanukovych, perhaps in spite of the Kremlin's wishes, was anything but "Putin's puppet."

Hillary's 'Dream Team': Prominent US War Hawks Join Anti-Trump Brigade
With this in mind, the US mainstream media's narrative about Manafort, his ties to Yanukovych, and thus to Russia and the Russian leadership, collapses like a house of cards.

Commenting on storm in a teacup stirred up around Manafort and Ukraine, Ukrainian anti-war activist Viktoria Shilova wrote on social media that she couldn't even comprehend what exactly the Manafort scandal was mean to prove.

"I do not understand why anyone would choose to indict themselves in such a way; this only confirms the pro-American sentiment of Yanukovych and that of his entourage…In fact, Yanukovych only exploited pan-Slavic sentiments in southeastern and central Ukraine, and the desire of three quarters of Ukrainians to speak, teach and work in the Russian language. Yanukovych and his manipulators made good use of the people's aspirations, and won the elections, before handing Ukraine over to the Americans."

Ultimately, Shilova suggested, "only afterwards did Yanukovych realize that he was a victim of the United States. And it was Manafort who pumped Yanukovych up with pro-American, pro-Western ideas, and instilled in him a morbid fear of US power."