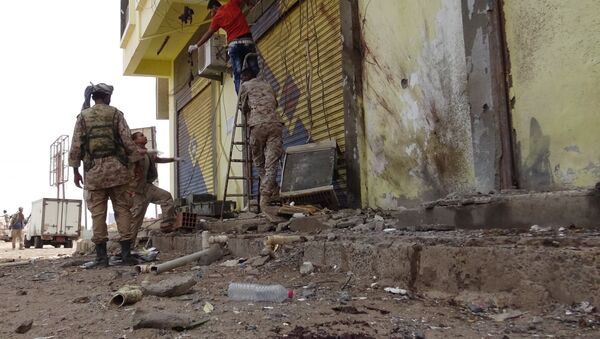 Doctors Without Borders (MSF)-supported hospitals in the war-torn Yemeni city of Taiz have registered a many-fold increase in numbers of wounded civilians admitted for treatment, MSF said Friday.

MOSCOW (Sputnik) — Fighting between forces loyal to the Saudi-backed government of Yemeni President Abd Rabbuh Mansur Hadi and the Ansar Allah movement's Houthi rebels has intensified over recent days. Airstrikes carried out by the Saudi-led Arab coalition caused the evacuation of MSF staff from six hospitals in the north of the country on Thursday after an airstrike partially destroyed an MSF-supported hospital in the Hajjah governorate killing at least 19 people on Tuesday.

#YemenCrisis: In one day MSF-supported hospitals in #Taiz received 59 civilian war wounded casualties, among them 19 women and children

Yemen has been engulfed in a military conflict between the government and the Houthi opposition movement, who are supported by army units loyal to former Yemeni President Ali Abdullah Saleh, since March 2015. The Arab coalition has been providing government troops with air support since March 2015. The coalition has been accused by the United Nations and humanitarian organizations of indiscriminately bombing civilians and killing hundreds of children.

#YemenCrisis: 800% increase of war wounded patients from one day to another in #Taiz MSF supported hospitals as the fighting intensifies.

Over 3,700 civilians have been killed and over 6,500 have been injured as a result of the conflict, according to the United Nations.