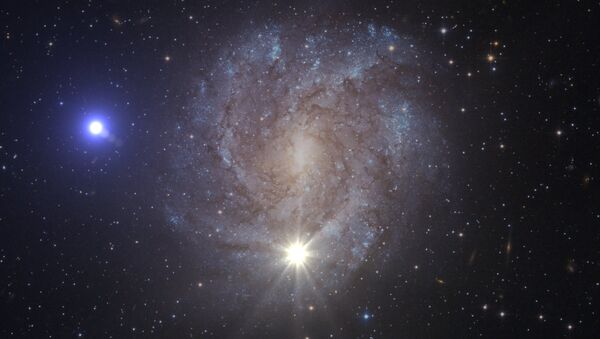 © NASA . ESA/Hubble, S. Geier
Subscribe
Supernova ash has been found in fossils created by bacteria here on Earth. The discovery, published on August 10 in the Proceedings of the National Academy of Sciences journal, suggests a link between an explosion of a star and an extinction event on our planet over two million years ago.

Osiris-Rex: NASA’s Doomsday-Hunting Spacecraft to Lift Off in September
Scientists have long thought that nearspace supernovae could influence life on Earth and possibly cause mass die-offs.

Previous research showed that supernovae generate a mildly radioactive variety of iron known as iron-60, throwing it out into space. While supernovae produce huge amounts of the material, other natural ways of creating it produce only up to one-tenth as much.

Significant levels of radioactive iron-60 isotopes were recently discovered in 120 core samples extracted from the Pacific, Atlantic, and Indian Oceans, proving a theory that fallout from a dying star washed across the Earth, affecting its biological development.

NASA Announces $1Mln Competition to Create Robots for Mars
Now scientists have found the product of a supernova event within the fossilized chains of magnetic crystals of a mineral known as magnetite, created by magnetotactic bacteria. "Magnetofossils" containing iron-60 first appeared between 2.6 million and 2.8 million years ago, scientists say.

The supernova debris apparently rained down on Earth for about 800,000 years, with iron-60 levels peaking about 2.2 million years ago, according to researchers. This time period coincides with an extinction event that claimed mollusks such as marine snails and bivalves. A period of global cooling occurred during that period as well.

"Finding still-live atoms of iron-60 ejected from the guts of a supernova 2.6 million years ago within magnetofossils is awesome," study co-author Shawn Bishop, an experimental nuclear astrophysicist at the Technical University of Munich in Germany, told Space.com.

"We can't say anything about the causative contribution of this supernova to this extinction, but…it seems like an astronomical coincidence."

Bishop added that future research may unveil more evidence to clarify a link between the two events.