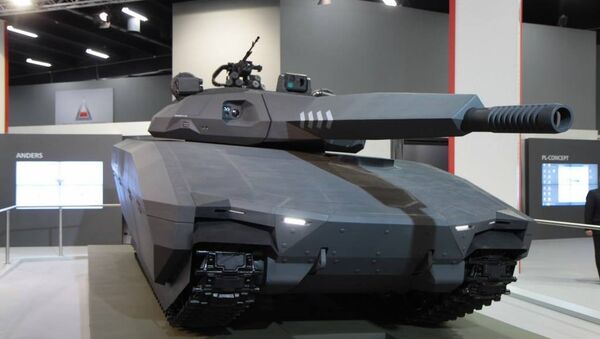 © Wikipedia
Subscribe
International
India
Africa
Recently Russian media reported that in the near future Poland is planning to seriously bolster the combat capabilities of its armed forces, including the increase in military equipment and weapons.

‘They Just Can’t Wait to Die as Heroes’: Poland Braces for War With Russia
According to a report by consulting firm Deloitte, Warsaw will increase military spending by 3-7 percent annually until 2020. Tank brigades are usually considered the basic component of conventional ground warfare.

Currently, there are 892 tanks with the Polish Armed Forces, the forth-largest fleet in NATO, after the United States, Turkey and Greece. It is interesting that all the vehicles are so-called third-generation tanks. In addition, Poland is now the only country in the European Union to develop a new tank, the PL-01 Anders.

The new tank is being developed by local company OBRUM with the support from Britain’s BAE Systems. Mass production is scheduled for 2018.

New Russia's Armata Tank Control System to Be Unveiled at Army-2016 Expo
The project is remarkable for the Polish military because the new tank will allow for replacing German-made Leopard-2 tanks, according to the Russian news website Life.ru. Moreover, some in Poland say the PL-01 would be rival to the newest Russian T-14 tank based on the versatile Armata platform.

"In order to build a good tank, a serious technical and engineering background is needed. Such countries as the US, Russia, Germany, Britain, France and China can do that. But Poland totally lacks experience in developing tanks. In the past, they modified Britain and Soviet machines. Now, they might take the German Leopard and make something out of it," Sivkov told Sputnik.

However, the expert suggested that Poland is unlikely to make a revolution in the tank industry.

One of the main problems Poland will face is the absence of a capable gun for the new tank, he pointed out.

"Another problem is developing composite armor with active dynamic protection. Poland does not have the technologies to produce this type of armor, unlike Israel, Russia, Germany and Britain. For example, Russia has unique active protection systems like the Drozd and the Arena. Israel has similar systems. And that’s all," the expert said.

As a result, any assumptions that the PL-01 would be the killer of the Armata are false, Sivkov concluded.