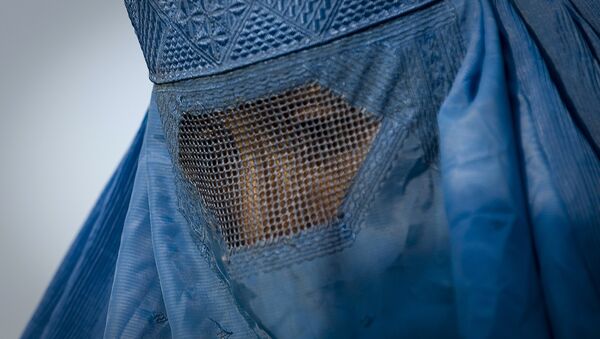 © AFP 2021 / NICOLAS ASFOURI
Subscribe
During a tense national debate in Germany on integration ahead of elections next month the country's interior minister has announced his backing of a partial burqa ban.

The Islamic full face veil "does not belong in our cosmopolitan country," said Thomas de Maiziere at a time when Germany is engulfed in fierce integration debate following the refugee crisis in Europe and Chancellor Angela Merkel's decision to allow 800,000 Syrian migrants settle in Germany.

"We agree that we reject the burqa, we agree that we want to introduce a legal requirement to show one's face in places where it is necessary for our society's coexistence — at the wheel, at public offices, at the registry office, in school and universities, in the civil service, in court," De Maiziere said following a meeting with counterparts from his conservative party.

Two key state elections are due to take place in September and it's expected that the right-wing nationalist Alternative for Germany (AfD) party is set to make strong gains having garnered increasing levels of support after Merkel's "open doors" policy over refugees that led to a movement of migrants from Syria, Iraq and Afghanistan.

But Merkel doesn't falter, refusing announce any cap the number of refugees and asylum seekers Germany will take this year.

More than 1.1 million asylum seekers arrived in Germany in 2015, the majority of them Muslim, stoking xenophobia and racism among anti-refugee communities, fueling the debate over integration and what Muslims should be allowed to wear in public.

Hard right members of the Christian Union bloc want an outright ban of the burqa being worn in public. De Maiziere is suggesting it be outlawed only in certain circumstances; a stance more likely to "win approval" in parliament, he said.

Germany recently unveiled new anti-terror measures following two attacks in the country that were claimed by Daesh, also known as Islamic State. The measures include stripping any jihadist of their Germany nationality and fast track deportations of migrants convicted of a crime.

Merkel has herself criticized the conservative Islamic dress.

"From my point of view, a completely covered woman has almost no chance of integrating herself in Germany," Germany's Chancellor told Redaktionsnetzwerk Deutschland, leaving the decision to be handled by De Maiziere.

"This is a question of finding the right political and legal balance and Interior Minister Thomas de Maiziere has my full support in finding a solution," Merkel said.

000000
Popular comments
does the burqa belong or is it an outmoded form of dress etc? Either way, it is a weapon to be used by both sides of the debate.
michael
20 August 2016, 11:46 GMT
000000
Newsfeed
0
New firstOld first
loader
LIVE
Заголовок открываемого материала
Access to the chat has been blocked for violating the rules . You will be able to participate again through:∞. If you do not agree with the blocking, please use the feedback form
The discussion is closed. You can participate in the discussion within 24 hours after the publication of the article.
To participate in the discussion
log in or register
loader
Chats
Заголовок открываемого материала
Worldwide
InternationalEnglishEnglishMundoEspañolSpanish
Europe
DeutschlandDeutschGermanFranceFrançaisFrenchΕλλάδαΕλληνικάGreekItaliaItalianoItalianČeská republikaČeštinaCzechPolskaPolskiPolishСрбиjаСрпскиSerbianLatvijaLatviešuLatvianLietuvaLietuviųLithuanianMoldovaMoldoveneascăMoldavianБеларусьБеларускiBelarusian
Transcaucasia
ԱրմենիաՀայերենArmenianАҧсныАҧсышәалаAbkhazХуссар ИрыстонИронауОssetianსაქართველოქართულიGeorgianAzərbaycanАzərbaycancaAzerbaijani
Middle East
Sputnik عربيArabicArabicTürkiyeTürkçeTurkishSputnik ایرانPersianPersianSputnik افغانستانDariDari
Central Asia
ҚазақстанҚазақ тіліKazakhКыргызстанКыргызчаKyrgyzOʻzbekistonЎзбекчаUzbekТоҷикистонТоҷикӣTajik
East & Southeast Asia
Việt NamTiếng ViệtVietnamese日本日本語Japanese俄罗斯卫星通讯社中文（简体）Chinese (simplified)俄罗斯卫星通讯社中文（繁体）Chinese (traditional)
South America
BrasilPortuguêsPortuguese
NewsfeedBreaking
14:30 GMTVideo: Police Act Against Climate Protesters Blocking M25 Motorway
14:15 GMTRonaldo Will Cause as Many Problems as He Solves for Solskjaer, Ex-Liverpool Player Carragher Says
14:03 GMTXi Urges SCO to 'Resist' External Meddling After US, Australia Vow to Bolster Ties With Taiwan
14:02 GMTUN Security Council Holds Meeting on Afghanistan
13:39 GMTHitting US Debt Ceiling Could Trigger Recession, White House Says
13:32 GMTUnited Airlines Briefly Grounded Flights in US, Canada Due to Computer Issues, FAA Says
13:29 GMTDutch Acting Defense Minister Resigns Over Kabul Evacuations Chaos, Reports Suggest
13:27 GMTFrance Says It Cannot Trust Australia in Trade Talks After Canberra Ditched Joint Sub Deal
13:20 GMTPiers Morgan Says His New Job Will Be 'Stuff of Nightmares' for Meghan Markle
13:18 GMTIndonesia Wary of Australia's Plans to Acquire Nuclear Submarines
13:14 GMTUS Slaps New Hezbollah-Related Sanctions on Several Individuals
12:57 GMTPakistan Will Get ‘Badly Burnt’ If It Courts the Taliban Beyond a Point, Warns Author
12:51 GMTUS General Mark Milley Reportedly Downplayed George Floyd Protests' Severity in Talks With Trump
12:51 GMTIs Narendra Modi Emerging as the Most Sports Loving Indian Prime Minister?
12:28 GMTFAA Bans Drone Flights Over Texas Bridge After Thousands of Haitians Filmed Flocking to Area
12:27 GMT'Show Got It Wrong': Priyanka Chopra Apologises After Taking Flak Over 'The Activist' Format
12:05 GMTNicki Minaj Tweet That COVID-19 Vaccines Cause Impotence Sparks Protest Outside CDC HQs - Video
12:01 GMTPelosi Asked After Capitol Riot If WH Staff Did Anything But 'Kiss' Trump's 'Fat Butt', Book Claims
11:48 GMTArmenian Police to Block Streets Near Central Square Due to Planned Rallies
11:32 GMTUK Military 'Actively Recruiting' New Spies for Deployment in Asian Region Amid AUKUS-Caused Waves