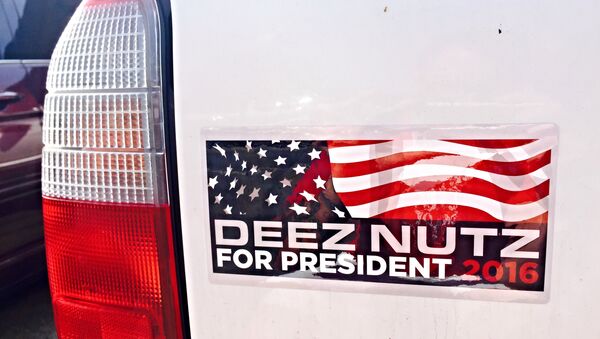 © Flickr / John Fischer
Subscribe
The Federal Election Commission has released a statement saying that they will be cracking down on “unlawfully false or fictitious” candidates like “Deez Nuts,” who have been consistently polling better than some actual third-party candidates.

Guccifer 2.0 Hacker Leaks New US Democrat Election Campaign Documents
The FEC announced on Thursday that they will now be sending verification letters to those who attempt to register fake candidates, and fraudsters could face fines.

“The Commission has authorized staff to send verification letters to filers listing fictional characters, obscene language, sexual references, celebrities (where this is no indication that the named celebrity submitted the filing), animals, or similarly implausible entities as the name or contact information of the candidate or committee,” the statement read.

They have also created a new procedure and hired staff to “verify information in filings from the 2016 election cycle that appear to be unlawfully false or fictitious.”

“The new procedure comes in response to an increase this election cycle in the filing registration and statement of candidacy forms (FEC Forms 1 and 2) that provide patently false candidate or treasurer names, questionable contact or bank information, or material that does not relate to campaign finance, such as drawings, essays and personal court records,” according to the statement.

The Invisible Hand: Can Google Actually Influence US Election Results?
The FEC explained that new staff will warn those filing questionable candidates that they could face penalties including fines if they continue their pranks.

“Deez Nuts,” a candidate in the 2016 election cycle ended up being a 15-year-old teen from Iowa named Brady Olson, who later endorsed Bernie Sanders. The fictitious character was polling at nearly 10% in some surveys.

Though Deez Nuts dropped out in August, it is still polling ahead of Green Party nominee Jill Stein in Texas, according to a poll released this week.

Olson had registered the fictitious candidate in the summer of 2015. Other candidates registered during the election cycle included "Butt Stuff," "Master Alexander Soy Sauce and Taters Gordh First,” and "Limberbutt McCubbins," apparently the name of a cat.

000000
Popular comments
well it would seem that apart from the Donald america has no alternative candidate worthy of a persons vote..get rid of all the old trash an put up some genuine people with the interests of the population ahead of their own
tonyw247
20 August 2016, 00:13 GMT
000000
It's time to stop treating life like a joke in the US and get serious about solutions.
jas
20 August 2016, 07:37 GMT
000000
Newsfeed
0
New firstOld first
loader
LIVE
Заголовок открываемого материала
Access to the chat has been blocked for violating the rules . You will be able to participate again through:∞. If you do not agree with the blocking, please use the feedback form
The discussion is closed. You can participate in the discussion within 24 hours after the publication of the article.
To participate in the discussion
log in or register
loader
Chats
Заголовок открываемого материала
Worldwide
InternationalEnglishEnglishMundoEspañolSpanish
Europe
DeutschlandDeutschGermanFranceFrançaisFrenchΕλλάδαΕλληνικάGreekItaliaItalianoItalianČeská republikaČeštinaCzechPolskaPolskiPolishСрбиjаСрпскиSerbianLatvijaLatviešuLatvianLietuvaLietuviųLithuanianMoldovaMoldoveneascăMoldavianБеларусьБеларускiBelarusian
Transcaucasia
ԱրմենիաՀայերենArmenianАҧсныАҧсышәалаAbkhazХуссар ИрыстонИронауОssetianსაქართველოქართულიGeorgianAzərbaycanАzərbaycancaAzerbaijani
Middle East
Sputnik عربيArabicArabicTürkiyeTürkçeTurkishSputnik ایرانPersianPersianSputnik افغانستانDariDari
Central Asia
ҚазақстанҚазақ тіліKazakhКыргызстанКыргызчаKyrgyzOʻzbekistonЎзбекчаUzbekТоҷикистонТоҷикӣTajik
East & Southeast Asia
Việt NamTiếng ViệtVietnamese日本日本語Japanese俄罗斯卫星通讯社中文（简体）Chinese (simplified)俄罗斯卫星通讯社中文（繁体）Chinese (traditional)
South America
BrasilPortuguêsPortuguese
NewsfeedBreaking
18:08 GMTVolcano Continues to Erupt on Spanish Island of La Palma
17:49 GMT'US Hegemonic System' Has 'Failed Miserably', Iran's Raisi Tells UN
17:24 GMTUSAF Reveals It Has Five New B-21 Strat Bombers in Production, Not Two as Originally Reported
17:07 GMTAncient Pyramid Made From Volcanic Ash Likely Built to 'Calm Earth’s Anger,' Media Says
17:00 GMTDozens Protest Outside UN Headquarters Against US Global Military Engagements
16:43 GMTUS House Democrats Introduce Legislation to Prevent Presidential Abuses
16:35 GMTPalestinians Ready to Renew Talks With Israel If They Show Readiness, Foreign Minister Says
16:31 GMTRussian Embassy in UK Slams Scotland Yard's Approach to Fact-Finding in Skripal Case
16:30 GMTWhat's Going On? Dog Looks Terrified as It Hears People Quarrelling
16:29 GMTSpanish Press Slams Barcelona After Spanish Giants Fail to Beat Minnows Granada in La Liga
16:26 GMTUS Suddenly ‘Concerned’ About Shortages of Gas in Europe After Spending Years Fighting Nord Stream 2
16:06 GMTAUKUS Will Not Have Any Impact on Quad, Says Indian Foreign Secretary Ahead of Leaders' Summit
16:02 GMTUS Space Force Commander Claims Russia Has Armed Satellite in Orbit to Destroy US Assets
15:54 GMTLust For Money, Not Sex Game, Killed British Heiress, Swiss Court Has Heard
15:40 GMTUS Sanctions Russia-Based Cryptocurrency Exchange Platform SUEX OTC
15:29 GMTMessi to Miss PSG's Next Game Against Metz as Club Confirms Argentine's Knee Injury
15:20 GMTScientists Developing Versatile ‘Nano Couriers’ for Future Medicine
14:56 GMT'To Ban or Not to Ban': US Agencies Reportedly Split on Whether to Blacklist Huawei's Spinoff
14:28 GMTSotheby's to Hold First-Ever Art Sale Show in Post-Soviet Russia
14:19 GMTSpanish Island of La Palma's Airport Operating Normally Amid Volcano Eruption