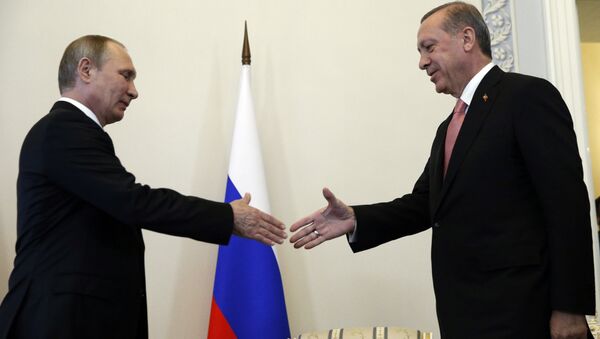 Ekaterina Blinova
All materialsWrite to the author
Turkey is at the crossroads where it must choose between two mutually exclusive civilization models: one in which the US is the sole global hegemon, and one in which free sovereign countries work together towards a truly diverse and multi-polar world, The Saker told Sputnik.

Russo-Turkish Rapprochement Spells Trouble for US Geopolitical Game
The recent meeting between Russian President Vladimir Putin and his Turkish counterpart Recep Tayyip Erdogan has raised the question whether the Turkish leader is moving the goalposts in the ongoing geopolitical game in the Middle East.

Indeed, Ankara and Moscow have announced the creation of a "new mechanism" of cooperation in Syria. The new mechanism will comprise the countries' intelligence services, foreign ministries and militaries.

In addition, Turkish Foreign Minister Mevlut Cavusoglu's remark that Turkey "may seek other options outside NATO for defense industry cooperation (although its first option is always cooperation with its NATO allies)," has seemingly caught the West by surprise, prompting growing concerns over Russo-Turkish rapprochement in the US and the EU.

Strategic Forecasting Inc. (Stratfor), also known as the shadow CIA, suggested that Ankara "could very likely make concessions to Iran and Russia on Syria" given "the international and domestic forces working against the Turkish government right now."

At Crossroads: Turkey Must Choose Between 'Global Hegemon' and Multi-Polar World

Is it possible that Turkey will establish an alliance with Russia and Iran and soften its tough stance on Bashar al-Assad?

"It is extremely hard to predict what Erdogan will do next due to his personality and to the objectively difficult situation Turkey is in," The Saker, a pseudonym for a US-based top level European military analyst, told Sputnik.

Ankara's Russian Pivot: Clear Sign of Turkey's Disappointment With the West
"While I fully agree that it is likely Turkey will have to make concessions to Russia and Iran, this is primarily due to the fact that Erdogan has now soured his relationship with the traditional patrons of Turkey: NATO, the US and the EU," he underscored.

The Saker believes that Erdogan will be far more willing to make promises rather than to actually deliver on them. According to the military analyst, the Russians are acutely aware of that and there is "zero real trust" toward Erdogan in the Kremlin.

"On one hand, most Russian analysts see Erdogan as a smart man, but also as a treacherous [politician] who cannot be trusted.  But on the other hand, Turkey is a large and powerful country, strategically located, and a key neighbor of Russia. Thus Russia simply has to try to establish the best relationship possible with whoever is in power in Turkey, even if that means dealing with a distasteful character like Erdogan," The Saker elaborated.

As for Ankara's alleged change of heart toward the Syrian government, such signs are yet to emerge, according to the military analyst.

"While very little was revealed about the discussions between the Russians and the Turks on Syria, I notice that in his interview with Russian TV just before traveling to Russia, Erdogan again repeated his accusations that Assad was guilty for hundreds of thousands of Syrian deaths and that he must go. Will Erdogan eventually change his tune?  Maybe. But right now he still sounds like a broken record," The Saker told Sputnik.

However, some analysts believe that a slight shift is possible.

Why Turkey 'Could Very Likely Make Concessions to Russia, Iran on Syria'
In his latest opinion piece for Hurriyet Daily News, Turkish observer Murat Yetkin suggested that Ankara "seems to be ready to accept a reconstruction of the Syria government, a coalition perhaps led by the [ruling] Baath party."

For its part, Stratfor assumed that "though Turkey is highly unlikely to ever support Syrian President Bashar al-Assad, it could decide to talk directly with al-Assad or support a transition government that includes him."

Does it mean that Turkey is steadily shifting from the West to the Russia-led coalition?

"What might, God willing, emerge from the current situation in an objective community of interests in which Turkey will come to realize that collaborating in the long term with Russia and Iran is far more beneficial to Turkey than to try to play the 'Russian card' against the 'American Empire' (or play the 'Empire card' against Russia)," The Saker remarked. 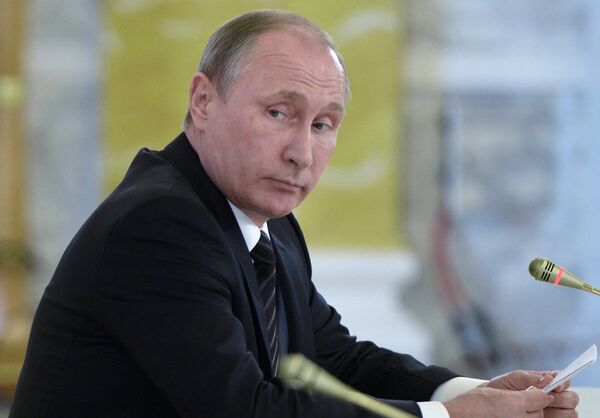 "Eventually, Turkey will have to choose between two mutually exclusive civilizational models: one in which the US is the world hegemon who gets to impose one single socio-economic model and one in which free sovereign countries work together towards a truly diverse and multi-polar world.  Alas, I don't think that Erdogan is willing, or even capable, of making such a choice, at least not in the foreseeable future," he stressed.

At the same time Erdogan has a good reason not to trust his American partners.

"There is a lot of pretty good indirect evidence that the US at the very least knew and did not oppose the coup attempt or even actively supported it.  Thus, when Erdogan became aware of this dynamic he really had no option than to go to turn to the Russians," The Saker noted.

Putin and Erdogan Talks: Will Russia-Turkey Reset Spell the End of NATO, EU?
It is worth mentioning that Vladimir Putin was the first among foreign leaders who condemned the attempted coup against the legitimate Turkish government and lent his helping hand to Ankara.

There is yet another reason why Washington's Middle Eastern policy prompts suspicions both abroad and in the United States.

The US House of Representatives' Joint Task Force recently published its report on systematic distortion of analytic products by CENTCOM in order to paint US efforts to fight Daesh (ISIS/ISIL) in Iraq and Syria in a more positive light. Although the complaint was first voiced in 2015 neither CENTCOM, nor the Defense Intelligence Agency (DIA) or other US government services have raised a finger to solve the problem.

To add to the confusion, Joint Task Force reported that it "did not receive access to all the materials it requested."

What lies behind the distortion of information about US' operation in Syria? What political forces in the US are interested in hiding the truth about what the Pentagon/CIA are really doing in Syria?

"The US operations in Syria are really no different from what the US did in Afghanistan over 30 years ago.  The US has been using various types of Takfiri [Sunni radicals] crazies in many wars (Chechnya, Bosnia, Kosovo, Afghanistan, Iraq, Iran, Yemen, etc.) as what I call 'foot soldiers for the Empire,'" The Saker emphasized.

"The only thing that changes is the label these forces operate under: whether 'freedom fighters' or 'moderate opposition,' they are still in reality only al-Qaeda or ISIS [Daesh], and at the end of the day they are all one and the same: Takfiri crazies, managed by Western special forces, paid for by Wahhabi (Saudi) money and engaged against all those who refuse to bow to the Empire," the military analyst continued.

Referring to the reports of the US-led coalition's "phony" war in Iraq and Syria that left Daesh's positions and supply roots virtually intact in the course of the Pentagon's aerial campaign in 2014, the military analyst nailed the US for its double game in the Middle East.

"Political reasons have forced the US to engage in a pretend war against Daesh just because it does not look very good when 9/11 is blamed on al-Qaeda while at the same time the US is using all its power to prop-up, organize, protect and manage the very same al-Qaeda," he noted. 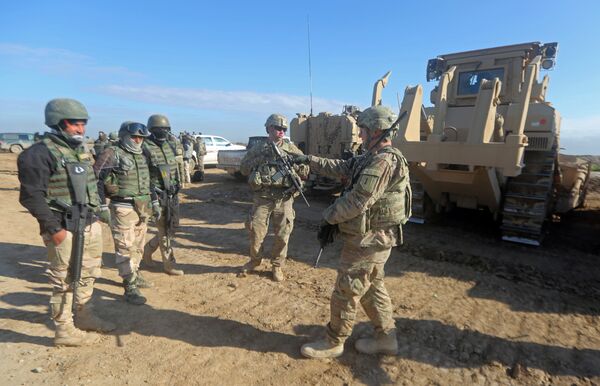 US soldiers give guidance as they train Iraq's 72nd Brigade in a live-fire exercise in Basmaya base, southeast of the Iraqi capital, Baghdad, on January 27, 2016
© AFP 2022 / AHMAD AL-RUBAYE

'Timber Sycamore': Untold Story of CIA Covert Operation in Syria
"This kind of 'executive chaos' is a surefire sign that the top of the Executive Branch has been tremendously weakened and that various actors are now taking major political decisions in their own hands," he noted.

In contrast, Russia's objectives are clear and transparent, as the country has over 30 years of fighting against Islamic extremism, the military analyst stressed, adding that Moscow and Tehran are opposing Wahhabi terrorism worldwide.

It is up to Erdogan whether to side with Russia or not. However, Islamist ideology as well as neo-Ottomanism has been proven to be toxic and dangerous for the Middle East region, The Saker warned.

What Moscow needs is a stable Turkey purged from any imperial delusions, he underscored.