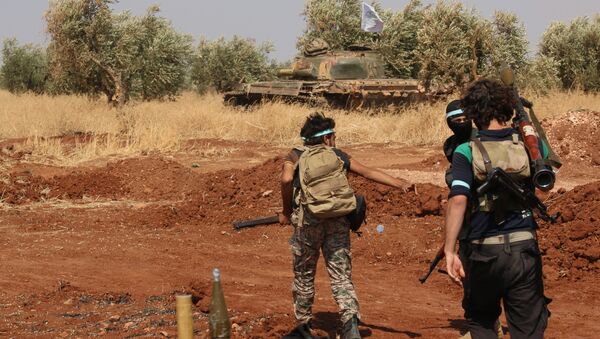 © AFP 2021 / ZEIN AL-RIFAI / ALEPPO MEDIA CENTRE
Subscribe
Russian Foreign Ministry spokeswoman Maria Zakharova commented on the Syrian crisis settlement, the relations between Russia and Turkey and a strike on a Doctors Without Borders hospital in Yemen during her weekly press briefing.

What's Behind Ex-CIA Chief's Calls to 'Kill Russians' in Syria
The Russian Foreign Ministry spokeswoman slammed the call by ex-CIA chief Michael Morell to "kill Russians and Iranians" in Syria.

She said that such comments undermine all the progress due to Russian and US' efforts on the resolution of the Syrian crisis.

"These statements are not just inhumane, they are made in Daesh-style," Zakharova said.

She also said that Morell's statement shocked not only Moscow, but the US State Department as well.

The Syrian crisis settlement is in deadlock due to the inability of Washington to separate moderates and terrorists, Zakharova said.

The joint work by Russia and the US on the Syrian reconciliation has entered a "pivotal phase."

Responding to queries on US media reports of a possible breakdown of the agreements reached between the countries, the spokeswoman stressed that Russian-US military and diplomatic work is still underway.

“Of course, if someone wants to disrupt this work, then this is unfortunately a question of their biases,” Zakharova said, noting that Moscow “wants and does everything possible for these daily negotiations to conclude successfully.”

Winds of Change: Russia, US, Turkey Will 'Join Forces' to Resolve Syrian Crisis
Maria Zakharova commented on the thaw in the relations between Russia and Turkey after the visit by Turkish President Recep Tayyip Erdogan to Russia earlier this month.

She said that Ankara and Moscow are constructively working on the Syrian crisis settlement.

"Existing differences cannot be resolved in one day, because these are significant disagreements, substantial issues. But work on it is underway and we value it as constructive," Zakharova reiterated.

Moscow-Ankara relations improved since the downing of a Russian jet by Turkey last fall following an apology and a reconciliatory visit to St. Petersburg by Turkish President Recep Tayyip Erdogan this summer.

Strike on MSF Hospital in Yemen

Arab Coalition Airstrikes Kill Civilians in Yemen, While UN Looks Away
The Russian Foreign Ministry spokeswoman condemned a strike by the Saudi-led coalition that partially destroyed a MSF (Doctors Without Borders) hospital in Yemen.

The bombing killed an MSF aid worker and 13 patients on Monday and wounded more than 20 in the fourth attack on its medical facility since the start of the year, the charity said.

"We reiterate that the use of military force against civilians and civilian objects is totally unacceptable. We urge to carry out a thorough investigation of such violations of international humanitarian law, to take comprehensive measures to prevent them in the future," Zakharova said at a weekly briefing.

She reaffirmed Moscow’s principled position for the warring parties in the Yemeni conflict to disengage from the "logic of war" and achieve a sustainable conflict resolution.

000000
Popular comments
Nice way of saying Obama supports terrorism and refuses to cooperate in any meaningful way with anyone trying to protect civilians and stabilize the situations in Iraq and Syria.
jas
18 August 2016, 17:15 GMT
000000
It’s not that Washington is having a hard time separating the “sheeps” from the “wolves,” Washington ‘secretly’ knows that this is a dangerous and futile effort in itself. However, it is dragging its feet and buying time until it figures out how to pull itself together (or how Hillary will pull it all together if she gets to sit in the Oval Office). The sheer stupidity of the US’s insistence on retaining these assets behooves me. President Assad should just outlaw all these anti government factions (or something like that). He now has nothing to fear. If Erdogan did it, why can't he?