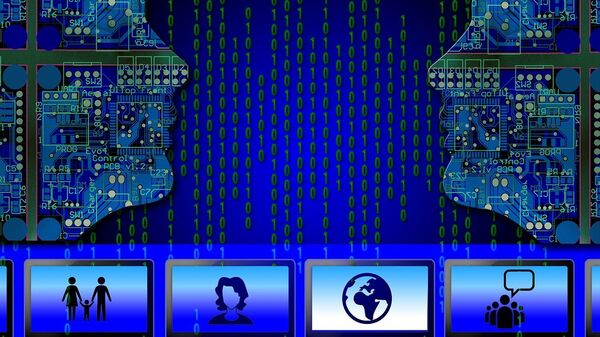 German law enforcement officers plan to launch tracking programs to maintain the revelatory operations. According to economic lawyer and politician Jörg Ahrweiler, the use of these viruses violates the Constitution and a number of laws. In an interview to Sputnik, Ahrweiler also questioned the effectiveness of these programs at their enormous cost.

Dark Web Fears: Germany Calls for EU-Wide Gun Control After Munich Shooting
The two programs are required to perform different functions, Jörg Ahrweiler, the chairman of the Pirate Party Germany in Saarlouis, told Sputnik. One of them is focused on the system unit, and the other on the database and hard drives.

The state monitoring program RCIS, "Remote Communication Interception Software," was created by the Federal Criminal Police Office of Germany in June 2015. In addition, it was revealed that a commercial spyware FinSpy made by Elaman/Gamma was purchased in 2013. According to Ahrweiler, this kind of invasion is even greater than during house-checks.

"Access to data is done anonymously. Typically, the user does not notice that they have become a victim of spyware," Ahrweiler said. "In some cases, there is no judicial decision for tracking. Such interference is a significant violation of the Constitution, fundamental rights and the private sphere, and in this form it simply cannot happen."

The plans of the Federal Criminal Police Office of Germany to launch spyware were criticized by the Federal Court of Auditors due to very high costs and insufficient control of its performance.

"Regarding the costs, there are different kinds of information provided. According to some data, it is about 200 thousand euros (US $226,570), according to the other — up to five million (US $5,664,175). Exact figures are unknown. Personally, I lean toward the higher numbers because there are still considerable development costs to go," the expert said.

Smartphones at Risk Under Draft EU Controls Over Surveillance Devices
"The fact that the effectiveness of the project is impossible to estimate, can be seen on the example of user data storage, which we opposed in the Pirate Party Germany.  It is also not known whether it will be possible at all to abstract any communication data or carry out surveillance based on it."

Back in March 2013, the Pirate Party filed a complaint to the Federal Court of Auditors, after the criminal police purchased the spy program FinSpy. The party plans to continue opposing the plans of the department.

"Tracking programs cannot replace the real work of police. Turns out that innocent are held up at gunpoint, and a massive violation of fundamental rights happens. It should not be this way, and we will take action against it," Jörg Ahrweiler claimed.

As an alternative to the tracking programs, "the party of the digital revolution" proposes to strengthen police work in its traditional sense. According to the expert, the classic police work needs to be done.

"We need to recruit staff. It is necessary to carry out proper preventive work and correct police work. This cannot be done by the programs, which somewhere and somehow penetrated into someone's computer, and provide questionable data or do not provide any data at all," Ahrweiler concluded.