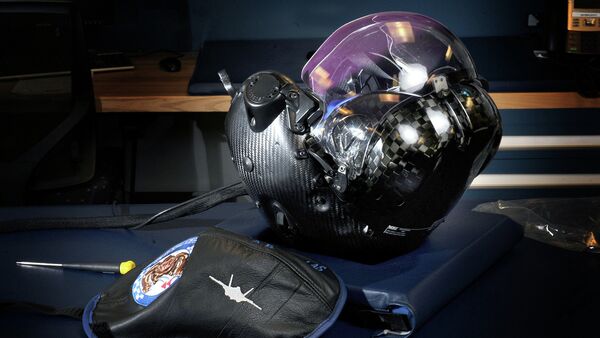 © Flickr / Joint Hometown News Service
Subscribe
The $400,000 helmet for the beleaguered US fifth-generation F-35 fighter jet uses state-of-the-art technology to provide a heads-up display in the visor -- but also blinds pilots during landing.

The F-35C variant is designed for use aboard aircraft carriers, and while the F-35A and F-35B have been deemed combat-ready, the US Navy is still fine-tuning the details of its version of the $1 trillion weapons program.

Of particular concern at the moment is the pilot helmet, and a "green glow" problem that makes it difficult for pilots to see at night.

"You could describe it as looking through a dirty window," said Tom Briggs, acting chief test engineer for the Navy, according to Defense Tech.

While the helmet-mounted display provides real-time targeting information and flight data, the display’s ambient light reflects inside the helmet, especially at night, obscuring a pilot’s visibility while trying to land.

"It’s not so bad on a really bright night," Briggs said. "On a dark night it skewers outside light reference for pilots. A pilot cannot pick up the lights on the carrier as well as he’d like to, he doesn’t necessarily pick up non-lighted signals on the ship as he taxiing around, he has a harder time picking out aircraft that are flying around."

The Navy will test a software patch that engineers hope will solve the issue of the green glow. Trials will be conducted aboard the USS George Washington soon, but early tests have shown positive signs.

Officials are waiting for a moonless night to conduct further landing tests.

"So we’re going to go out on a really dark night and we’re going to do our final evaluation on the green glow," Briggs said. "And we think that that problem is solved."

Trials will also test a number of other F-35C features, as the Navy scrambles to perform final evaluations. The aircraft’s Electronic Warfare capabilities will be assessed, as well as the software used to implement the onboard device that grabs the landing wire on the deck of the ship.

The helmet has come under scrutiny in relation to the F-35’s faulty ejection seat. Evaluations found that the seat was potentially dangerous to pilots weighing less than 165 pounds, and one possible cause was the five-pound helmet could cause neck damage.

000000
Popular comments
That's what happens when there's too much money slushing around- useless things get developed that do more harm than good. A half a million dollar helmet that makes you crash your plane. Duh.