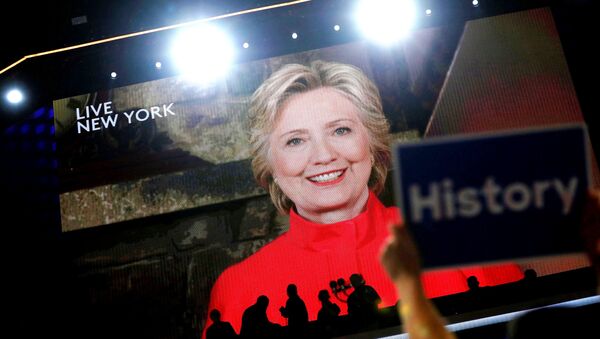 According to union representative Jeff Bigelow, the reason Democratic White House candidate Hillary Clinton will likely win blue collar votes in key swing states in November is that the working class is stuck in her “lesser of two evils web.”

US State Department to Release FBI-Uncovered Clinton Emails
Hillary Clinton, together with her husband, former President Bill Clinton, have earned more than $153 million in speaking fees since 2001. Yet now the former secretary of state has presented herself as a "granddaughter of a factory worker" and the candidate for the working class.

Jeff Bigelow told Radio Sputnik's Brian Becker that the reality of the relationship between the Clintons and labor is different from the explanations offered during their presidential campaigns. Before Bill Clinton came into office, he focused on jobs, Bigelow noted, but as soon as he became president, his campaign promises were forgotten.

"He has a long record of being anti-labor," Bigelow told Loud & Clear. "And then of course Hillary Clinton herself, not only praised NAFTA repeatedly through the Bill Clinton's presidential years, but subsequently as a Senator…She did it even when she was running for president in 2008."

Emails leaked in the beginning of this year suggest that though Hillary Clinton said in her 2008 campaign that she was against a free trade agreement with Columbia, she was pressuring people to agree to the deal while she was secretary of state.

"There isn't anything about the reality of the Clintons that is pro-labor" Bigelow said.

Walter Smolarek, Loud & Clear producer and co-author of a forthcoming book on the domestic and foreign policies of the Clintons, agreed that the couple has played a big role in moving the Democratic Party to the right, and solidifying a new era of neo-liberalism.

"There was an extensive diminution of the role of organized labor within the Democratic Party establishment as the Clintons took over," Smolarek said.

The labor movement was strong enough in the mid-1960s and 70s that Richard Nixon as president established the Environmental Protection Agency and supported the equal rights amendment for women.

​The situation has changed dramatically over the years, and largely due to Bill Clinton's economic policies. His decisions have left millions of people on the verge of poverty throughout the 1990s, Smolarek stated, including the replacement of ‘Aid for families with dependent children' program with the ‘Temporary assistance for needy families,' in which the words ‘temporary' and ‘inaccessible' were widely considered to be interchangeable.

Bigelow added that it is surprising that the Democratic Party is consistently supported by labor unions, considering a major decline in wages, fewer workers organized into unions and other obvious obstacles. The only explanation, he believes, is that the current "lesser evil politics" immobilizes the movement, narrowing its horizons.

This may result in a situation where the working class once again supports a candidate that will not give much in return, he said.

"The labor union is taken for granted and they are taken advantage of every time. They are caught in this web described as the lesser of two evils, thinking that that's the only choice, the only course of action, which is incorrect."