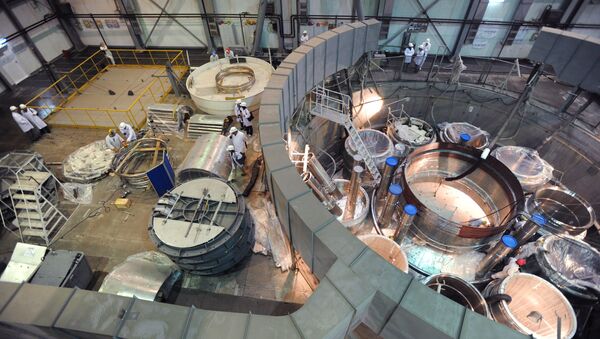 MOSCOW (Sputnik) — The project is estimated to be completed by 2023, according to Rosatom's 2030 innovative development and technological modernization program published Tuesday.

The WWER is expected to have dramatically improved indicators on nuclear fuel use, allowing to reuse major part of the spent fuel after reprocessing.

Rosatom also plans to draft a feasibility study and a terms of reference for the most economically efficient nuclear power plant unit in 2027, according to the published program.

As part of the effort, Rosatom's program sets a 2020 deadline to develop source data and technical specifications for the world's most efficient unit, an optimized 1,250-1,255MW WWER-TOI nuclear reactor.

The innovation development program also stated that Rosatom plans to acquire the technology for disposing of dangerous radioactive waste by 2030.

Rosatom Plans to Develop 3D Printing for Nuclear Industry
Nuclear fission waste radioactivity is caused mainly by minor actinides, which include the isotopes of neptunium, americium and curium. Minor actinides are removed by the transmutation process, which involves irradiation in an intense neutron field.

Rosatom has already begun developing technologies for eliminating minor actinides. In 2015, a Rosatom institute created a fuel tablet made of uranium, plutonium, neptunium, americium and curium nitrides. The tablets can form heat-generating elements which can then be used in heating reactors to transmutate minor actinides. Scientists expect to assemble the first such reactor in 2016.

The main transmutation process techniques and experiment results are to be presented in 2020, while in 2023, Rosatom researchers are set to create technology for processing spent MOX fuel, consisting of a uranium-plutonium blend. In 2027-2029, the prospects for creating nuclear fuel consisting of neptunium and americium are to be determined. Finally, a database containing the properties of minor actinide fuels is set to be compiled in 2030.

000000
Popular comments
Anyone know where I can buy a new "Nooscope" and have it shipped to Walla Walla Washington?