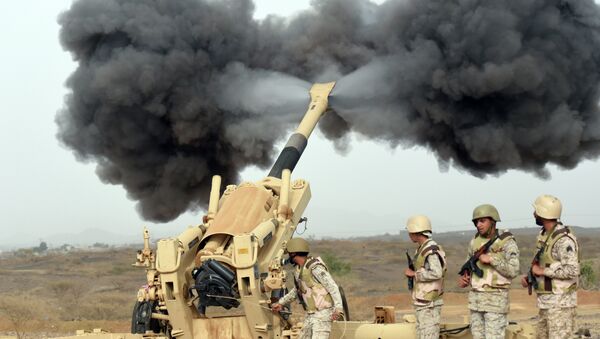 With the UK already facing a legal challenge over its continued arms sales to Saudi Arabia, senators in the US have proposed blocking the latest sale of weapons to the Gulf kingdom, raising questions about the future of Western military support for Riyadh.

Less than a week after the US government approved the possible sale of US$1.15 billion worth of tanks, machine guns and other military equipment to Saudi Arabia, Republican senator Rand Paul is now considering blocking the deal.

"I will work with a bipartisan coalition to explore forcing a vote on blocking this sale," he said a statement to Foreign Policy magazine.

Should the US be selling $1.15 billion in arms to our unreliable "ally" Saudi Arabia?

​"Saudi Arabia is an unreliable ally with a poor human rights record. We should not rush to sell them advanced arms and promote an arms race in the Middle East."

Paul's stance comes amid an increase in concern over the humanitarian situation in Yemen, with reports over the weekend suggesting at least 10 children were killed in an alleged Saudi airstrike against a school in the country's north.

UN estimates for the 16 month-long Saudi-led offensive against Houthi rebel groups put the death toll at more than 6,400, with the majority of those civilians.

Ban Ki-moon condemns the attack on a school in northern Yemen that killed at least 10 children and injured many more https://t.co/MN222awDNJ

​On top of the thousands of deaths, the conflict has forced 2.8 million people from their homes and created a disastrous humanitarian situation in Yemen, where 80 percent of the population is in need of aid.

Despite Washington's longstanding military support of Riyadh, Paul's push to block the latest sale of arms does have some support, with fellow Senate foreign relations committee member, Democrat Chris Murphy, also critical of the US' policy towards Saudi Arabia and Yemen.

815 civilian casualties in 4 months in #Yemen… and that's only the ones documented by @UNHumanRights https://t.co/iXMOCr0k8R

"Every single civilian death inside Yemen is attributable to the United States. We accept that as a consequence of our participation," he added.

I wish our president pays attention to what senator Chris Murphy says about Saudi Arabia. This country is breeding terrorism everywhere

​Lawmakers in the US have 30 days after any arms deal is agreed to try and block it.

While senators in the US are leading the charge to try and block the country's latest proposed arms sale to Saudi Arabia, the UK is undergoing similar protests, as lawmakers and campaign groups push for Britain to step back from its tight alliance with Riyadh.

Following reports and allegations that British-made weapons have been used against civilian targets in Yemen, the UK High Court will hear a case brought forward by the Campaign Against Arms Trade (CAAT), who have called for London to halt all arms sales to Saudi Arabia amid concerns over breaches in international law.

Activists outside court today in solidarity with @isa_alaali arrested for action against #farnborough #WarStartsHere pic.twitter.com/ZtEjli7g8H

​CAAT officials have described the UK's arms sales relationship with Saudi Arabia as its "most shameful."

"Not only does it brutally repress its own population, it has used UK weapons to help crush democracy protests in Bahrain; now UK-made warplanes are playing a central role in Saudi Arabia's attacks in Yemen," a statement from the group said.

​"The UK has continued to support Saudi air strikes in Yemen and provide arms despite overwhelming evidence of repeated breaches of international humanitarian law," CAAT added.

"The UK should never have been arming repressive Saudi Arabia in the first place. Our military support for the Saudi regime makes us complicit in its wrongs. The government refuses to act, so we have to."