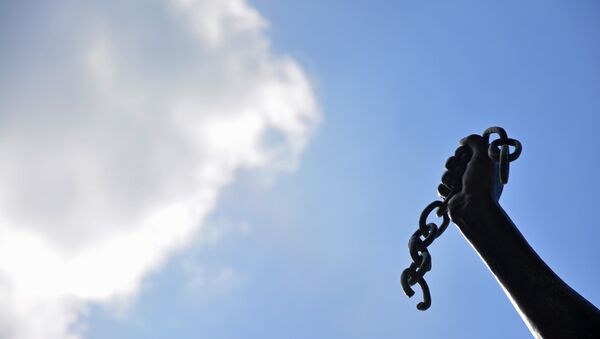 Britain's new anti-slavery powers at sea, mean the marine industry's "flag of convenience" system is under scrutiny on UK waters.

First of Its Kind: Britain Passes Law Outlawing Modern Day Slavery
A "flag of convenience" allows the owner of a ship to pay a fee and register the vessel in a different country other than its origin. It also allows the owner to fly the flag of any state on the ship and be governed by that state's law at sea.

However, any ship flying any flag on UK waters can be stopped and searched by law enforcement officers at sea after new powers under Britain's Modern Slavery Act for any potential victims of slavery.

It means the fight against human trafficking and slavery includes taking on the marine industry on UK waters.

​Law enforcement officers can now stop and search ships at sea, suspected of being involved in modern slavery practices. Officers will be able to arrest any offenders and rescue the victims from the ships.

"Officers from the Shetlands to the Isles of Scilly now have the power to arrest offenders and protect victims from this abhorrent crime whether on board a ship or on our shores," Sarah Newton, minister for vulnerability, safeguarding and countering extremism said.

"Modern slavery is a crime that rips victims from their families, trapping them in a cycle of abuse at the hands of ruthless gangs."

Since the beginning of August 2016, vessels can be intercepted, boarded by law enforcement officers and any evidence seized and suspected arrested on prosecuted under Britain's Modern Slavery Act.

Anyone on board, found guilty of perpetrating human trafficking crimes could face up to life imprisonment.

​"Our message is clear — the UK is taking action to protect victims," Newton said.

Between 2013 and 2014, the UK's National Crime Agency found 37 potential victims of modern slavery who had been reported to have been exploited in the maritime industry.

The illegal and unregulated fishing industry is said to be worth around US$23.5 billion a year.