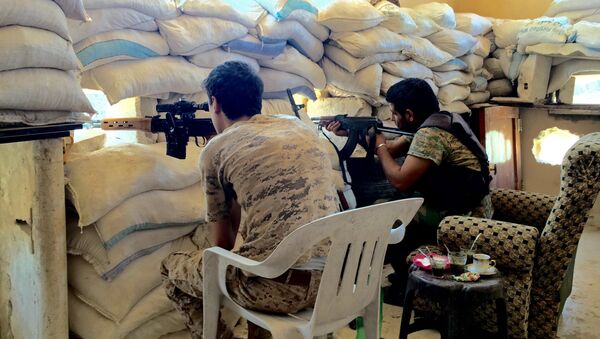 © Sputnik / Michael Alaeddin
/
Go to the photo bank
Subscribe
Russia’s RIA Novosti correspondent Mikhail Alaeddin spent several days with Syrian Army soldiers on the frontline in the south-west of Aleppo, and witnessed their successful assault near the artillery school in the area. Here is his first-hand account.

Nightfall is the snipers’ time at the frontline in Syria’s Aleppo. The Syrian soldiers equipped with night sights receive the order to move up into positions where they will spend a long and sleepless night, the correspondent writes in his article for RIA Novosti.

The column is quick to get ready and contains five off-road vehicles of the Syrian Special Forces. One of the commanders allows the correspondent to “sit on the tail” of one of the two snipers.

The vehicles leave their positions with their lights switched off as the militants are just a few hundred meters away. The headlights are only switched on upon entering into the central blocks on the city, and to get there you have to drive through the whole city.

The streets are alive

At ten in the evening it is still impossible to drive through the traffic jams. According to some unspoken tradition, nobody lets anyone pass, resulting in a constant stream of car horns and yelling.

Alaeddin is surprised with the pace of peaceful live. There are open and working shops and restaurants on both sides of the road. Well-dressed, stylishly coiffured young people are smoking hookahs and playing nardes.

Parents are buying their children ice-creams and snacks. 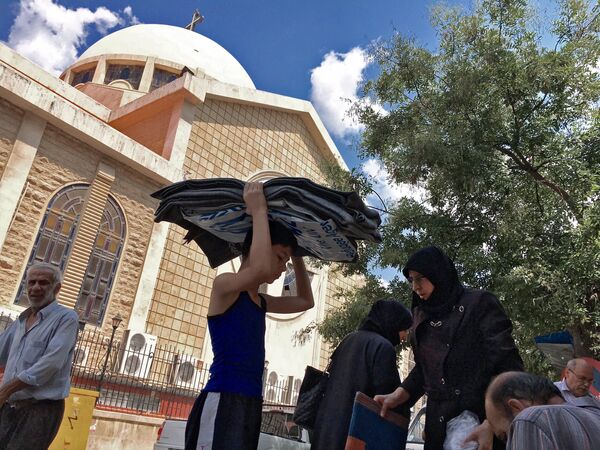 “Would you believe that we are driving to war?” the head of the battle unit, a colonel with a call sign “Fahd” asks the correspondent peering into the café lights.

“It’s only ten minutes to go, but you’ll see the contrast. This is the peculiarity of the local war,” he adds.

Having gone through the “islet of peace” the vehicle heads to the checkpoint in the nearby area and once again, it gets completely dark.

The drivers seem to know every pit on the road so well that they can drive with their eyes closed. 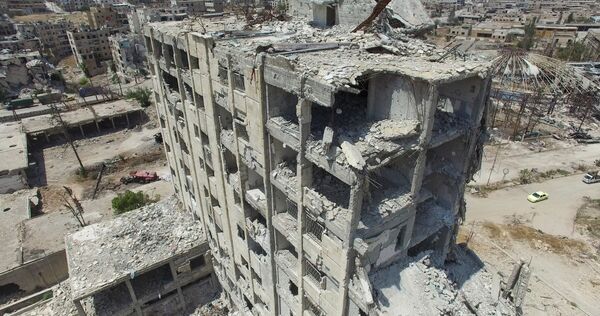 In just ten minutes the vehicle comes out into an area that looks like a different world. There are no lights, children or the buzz of everyday life.

The only sound is of walkie-talkies, the roar of aircraft and mines exploding behind the nearest house.

“And here is the greeting. We’re here! Everyone knows his place of work. You can go anywhere, just don’t make a sound or use any light. God willing, we’ll get you back at dawn,” the colonel tells his soldiers.

The fighters get to the two nearby buildings already taken by tired military and militia, who however still wear stylish haircuts. 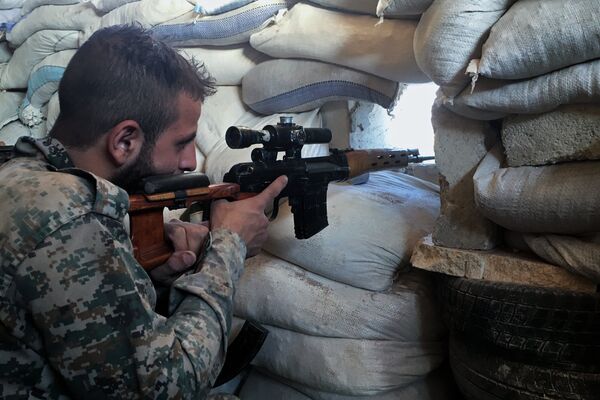 Syria. A Syrian Army soldier at the front line against a military logistics school in southern Aleppo
© Sputnik / Michael Alaeddin
/
Go to the photo bank

There is no requirement to cut your hair short in the Syrian Army.

“They have already been fighting for several years. They have no other little everyday joys in life, and if they like it and it doesn’t interfere with operations, let them style their hair,” one of the officers on the position explains to the correspondent.

Peculiarity of the nighttime fight

Usually there are no active military operations at night. Due to the darkness, the soldiers of the Syrian Army and the terrorists prefer fight at a distance. This evening is no exception.

The snipers are watching for any movements on the territory of the artillery school across the road. The spotters are yelling into their communication devices directing the aviation fire. 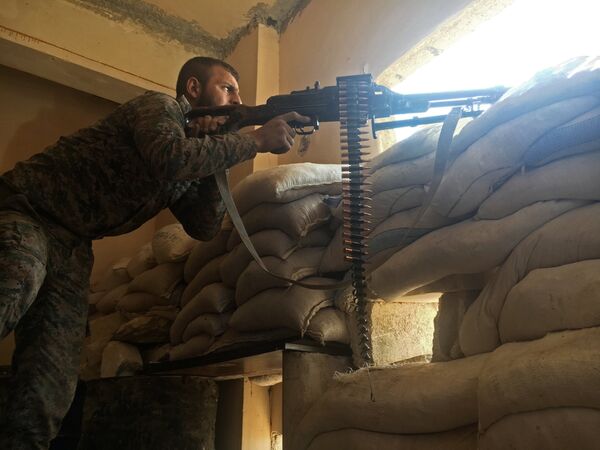 A Syrian army soldier during the assault on the artillery school in the south-east of Aleppo, Syria
© Sputnik / Michael Alaeddin
/
Go to the photo bank

The terrorists in possession of the artillery school building are not asleep either.

Reports of the first success light up the walkie-talkie – a fighter in a nearby position has liquidated two militants near a water tower.

Hour after hour there are more and more hits. The officers seem pleased with the job done by the nearly arrived group.

The success is however marred by the reports of two wounded soldiers at the observation point to the west.

“The problems begin when the foreign mercenary snipers arrive at night. They are also equipped with night-sights and work well,” the somber captain tells Alaeddin.

According to Syrian military intelligence, there are a large number of foreign mercenaries fighting in Aleppo, many of them head the terrorist units. 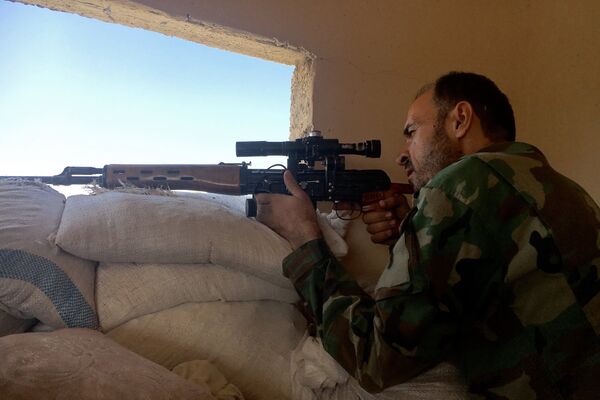 A Syrian army soldier during the assault on the artillery school in the south-east of Aleppo, Syria
© Sputnik / Mikhail Alayeddin
/
Go to the photo bank

Hundreds of foreigners are now blocked in the eastern part of the city. Many terrorists participating in the fight in the south-east of the city are from Arab and European countries and from the post-Soviet states.

The terrorists use mined vehicles and suicide bombers for their assaults. The radicals try to explode as many soldiers at the frontline of their defense as possible before engaging in an open fight.

This strategy is not a new one, and so the pro-government forces have all the equipment they need to be able to meet the enemy at their frontline at any time of the day or night.

An assault at dawn

The watch shows five in the morning. Time for an assault. A truck carrying soldiers is coming from the Salaheddine district of Aleppo. The walkie-talkie says the group on the other side of the artillery school is also ready. 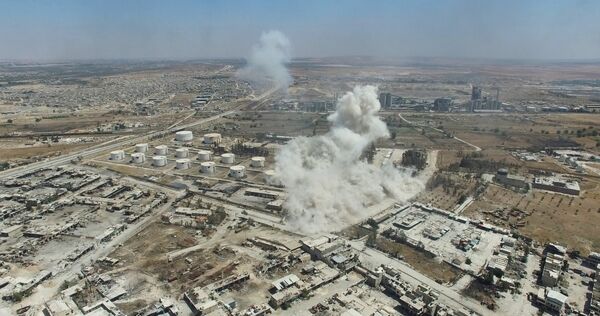 The soldiers start crossing the highway, which has become a frontline, at regular intervals. A fortification on the road covers their movement.
From three hundred meters  you can clearly see the each enemy bullet tunneling into the sand barrier, leaving a cloud of dust.

There is already a fight at the entrance to the artillery school. The terrorist were ready for a counter-attack. There is the sound of machine guns and heavy guns.

The bullets and shells are being fired at the position of the correspondent. The Army snipers detect and kill their enemies, ambushed in the windows of the school buildings. 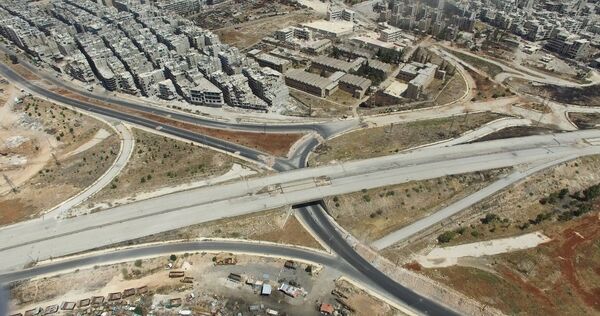 But the militants are well-equipped – the flashes from the machine gun fire are seen from three sides. It is hard to hit them from a distance as they are well-hidden.

The vanguard unit of the pro-government forces is forces to retreat after one of its fighters is killed and two others wounded.

The second group makes it through a tunnel but is unable to settle there. The support group of the pro-government forces makes it to the other side of the school.

In order to disperse the Syrian Army soldiers, the militants attack their positions in the nearby houses several kilometers away from the main battle theater. 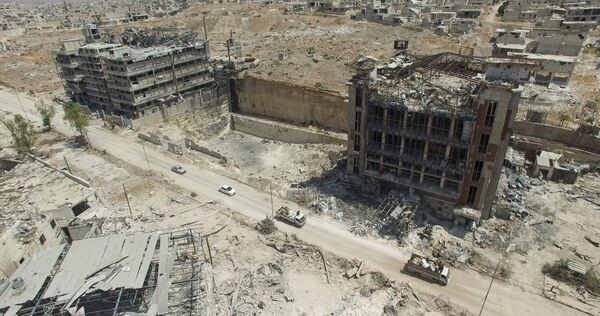 The members of the radical groups, largely outnumbering the pro-government forces, were able to capture the artillery and logistical schools, part of 1070 district and Ramus district.

Up to 8,000 terrorists who came from the neighboring provinces of Idlib and Hama have attacked the Syrian Army positions in order to break the blockade of their comrades in the eastern districts of Aleppo.

But they didn’t succeed and were unable to breakthrough.

However the Syrian Army soldiers are also not strong enough to return control over the lost positions.

According to the reports of the commanders, they were able to entrap the terrorists on the territory of the artillery school.

Now the Syrian military are drawing in the assault team to be able to retake the strategically important objects and launch a large-scale operation of the liberations of the Syrian northern capital. 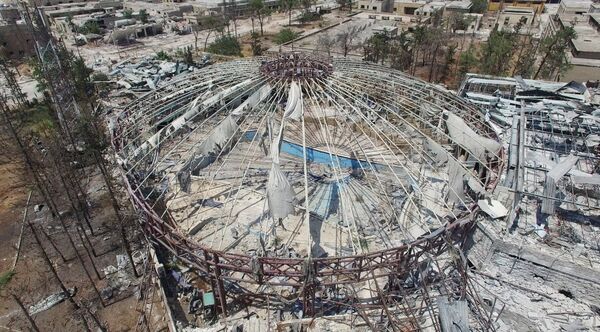