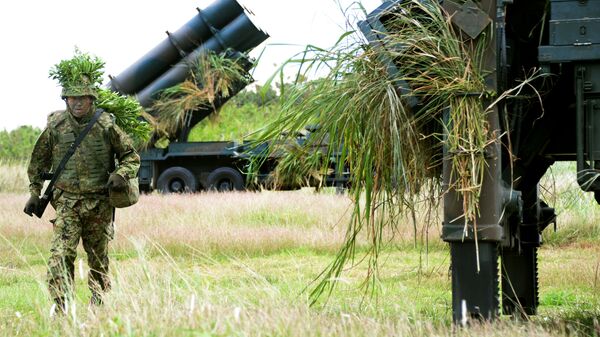 Asia
Japan Vows to Develop New Land-to-Sea Missile to Protect Disputed Islands
As part of its defense program, Japan intends to develop new missile launchers capable of protecting the remote reaches of the country, including a set of islands which are disputed between the two nations.

According to the local media, anti-ship missiles with a range of about 300 kilometers, which is enough to cover the island chain known as Senkaku Islands in Japan and the Diaoyu Islands in China, may be deployed at the Miyako-jima Island, and on the islands of the Sakishima archipelago in 2023.

This development resulted in a barrage of criticism from the Chinese media which see it as a sign that Japan is preparing for an offensive war. Zhou Yongsheng, a professor at the Institute of International Relations at the China Foreign Affairs University, said that if Japan really gets its hands on these missiles, it would mean that Tokyo is ready for a hard struggle.

Japanese social media users also criticized this proposal, albeit from a different standpoint. The Japanese netizens believe that these missiles are needed now as by 2023 it might be too late, and that it might be cheaper to buy anti-ship missiles from the United States. Some of them even suggested that the missiles should be deployed directly on the disputed islands.

However, Russian military analyst Vladislav Shurygin told Sputnik that an armed conflict between Japan and China over the disputed islands is fairly unlikely and neither of their interests. He pointed out that both countries are economically interconnected, and a conflict would put a considerable strain on Japan’s economy which continues to deal with one hardship after another for the last ten years.

"Japan still hasn’t completely recovered from the Fukushima nuclear plant disaster, so the country requires a period of calm for restoration. Furthermore, Japan’s Self-Defense Forces (JSDF) do not have the offensive potential of posing a threat to China. While modern and numerous, the Japanese Navy lacks the troop landing capability and striking power in order to stake a claim on those islands. So the JSDF, at least for now, aren’t capable of spearheading a serious expansion of this kind. And China has declared its priorities – to become a leader in the Asian-Pacific region and to edge out its long-time rival Japan – a long time ago. But China is well aware of the fact that Japan is backed by the United States with its powerful military and has its own interests in the Asian-Pacific region," Shurygin explained.

Early in August the US deployed a squadron of B-1B Lancer strategic bomber aircraft to its Guam airbase, allegedly as a response to the North Korean missile tests. But could it also be a signal to China, considering the fact that Lancers have "exceptional capabilities for launching long-range strikes?"

Meanwhile, the project for increasing the defense level of remote islands was included in Japan’s national security program back in 2013. Back then Tokyo even intended to develop ballistic missiles with a range of up to 500 kilometers by 2016, but due to concerns that such a weapon could be considered a violation of the 9th article of Japan’s constitution, the proposal was scrapped.