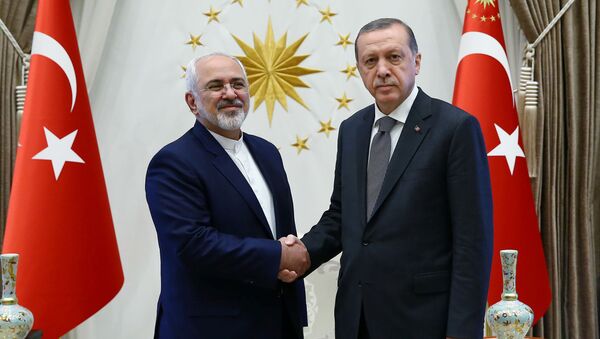 © REUTERS / Kayhan Ozer/Presidential Palace
Subscribe
Iran's Foreign Ministry has offered to organize a trilateral meeting between Iranian, Russian and Turkish officials to discuss the settlement of the Syrian crisis. Asked to comment on whether the proposal was realistic, Russian analysts suggested that recent events have made diplomatic initiatives once considered impossible possible.

In a visit to Ankara on Friday, the first since the failed Turkish coup attempt last month, Iranian Foreign Minister Mohammad Javad Zarif was reported to have offered to facilitate a joint meeting between the leaders of Iran, Russia and Turkey to discuss settling the Syrian crisis. In the course of his visit to the country, Zarif met with Turkish President Recep Tayyip Erdogan, Prime Minister Binali Yildrim and Foreign Minister Mevlut Cavusoglu.

Speaking at a joint press conference with Cavusoglu, the Iranian foreign minister also emphasized that the three countries were "key players in the region, and need to engage in dialogue and cooperation." Hinting at the existing disagreements over the situation in Syria, Zarif noted that "even if there are differences among regional countries, they can be ironed out via dialogue."

Iranian Foreign Minister Offers Trilateral Meeting With Russia, Turkey on Syria
In turn, the Turkish foreign minister emphasized that his country was interested in the security and stability of Iran, adding that the two countries have a common understanding with respect to Syria's territorial integrity, as well as the need to obstruct the ambitions of "Kurdish separatists." Moreover, Cavusoglu hinted that Erdogan may make a visit to Tehran in the coming weeks.

A day before his meeting with Zarif, Cavusoglu said that Turkey would be resuming its air campaign against Daesh (ISIL/ISIS), adding that Ankara was ready to discuss with Russia the possibility of a concerted effort against the terrorist group, indicating that the Turkish military has details on the location of Daesh bases. "This does not mean that Turkish aircraft and Russian aircraft will be flying together," he clarified.

Commenting on Cavusoglu's statements, and on Zarif's proposal of a Russian-Iranian-Turkish partnership in the Middle East, Svobodnaya Pressa contributor Anton Mardasov wrote that "in Russian society, the Turkish foreign minister's words caused a split reaction. Until recently, Russian state media did not hesitate in accusing Erdogan and his entourage not only of engaging in the illicit trade of oil and artifacts with the Islamists, but of direct support for Daesh and the Nusra Front terrorists. And suddenly there is this talk of 'joint operations' and even the possible closing of the hole in the Syrian-Turkish border."

Accordingly Mardasov noted, "in the context of efforts to improve relations, such comments could be seen merely as non-binding diplomatic rhetoric. However, as strange as it may sound, and despite the many contradictions on Syria, coordination between Moscow, Tehran and Ankara really is possible." He added that "for this to occur, it's not at all necessary for the parties involved to be the best of friends."

Foreign Policy Shift: Turkey Changing Priorities and Partners on Syria
For instance, the journalist noted, the recent efforts by the US-supported Kurdish militia in northern Syria, including their military successes and the creation of a new constitutional order for the territories under their control, are surely unpleasant for Erdogan, since it threatens the creation of a de-facto Kurdish state.

"It's entirely possible that US support for Syria's Kurds…was one of the main reasons prompting the Turkish leader to apologize for the downed Russian aircraft," Mardasov wrote. "Hence also his attempts to improve the heavily damaged relationship with Moscow, which gently supports the Kurds, but advocates for Syria's territorial integrity. The position of Damascus and Tehran on any form of Kurdish autonomy is extremely negative. In this respect, the interests of Ankara and the pro-Syrian coalition are similar."

Analysts speaking to Svobodnaya Pressa generally agreed with the journalist's assessment, suggesting that the flurry of diplomatic activity, including Erdogan's recent visit to St. Petersburg and the events that followed, really do seem to indicate the formation of some kind of a loose Russian-Iranian-Turkish strategic partnership.

For his part, Middle East and Turkish specialist Yuri Mavashev emphasized as much, noting that "it's worth recalling that on the night of the coup attempt in Turkey, Russia and Iran took a principled position on the inadmissibility of an unconstitutional change of power in the country."

"It's also important to note that all the words of well wishes directed toward the Turkish leadership were accented by a certain expectation that Turkey would change its foreign policy. During the Turkish delegation's visit to St. Petersburg, President Vladimir Putin emphasized that he was one of the first to call President Erdogan during the events."

Russo-Turkish Rapprochement Spells Trouble for US Geopolitical Game
"This was a clear signal of the fact that Russia and Iran would like to consolidate the changes in Turkey's political course, which really began to take shape following Ahmet Davutoglu's departure from the prime ministerial post," the analyst emphasized.

That this will take time is only natural, Mavashev noted. After all, "what we are talking about is not only about a transition to a fundamentally different policy, but also the use of new policy instruments for dealing with disputed issues. Earlier, it's worth recalling, Ankara factually adhered to a vector aimed at the disintegration of the Syrian state."

Moreover, the analyst said that it was worth drawing attention to the fact that the recent string of meetings between Russian, Turkish and Iranian officials has taken place in regular succession. On August 12, Foreign Minister Zarif held talks with Turkish officials. On the eve of the Putin-Erdogan meeting in St. Petersburg on August 9, Russia, Azerbaijan and Iran held their own trilateral meeting. Before that, Erdogan declared his readiness to cooperate "more than ever" with Tehran and Moscow to restore peace in the region.

"Therefore, what's at stake here is the question of cooperation at the political level on the joint solutions to problems, with the parties seeking to at least achieve a status quo arrangement, all without interference from Western countries" and their proxies.

Stratfor Says Washington Brought Moscow & Ankara Together On Purpose…
"For instance," Mavashev recalled, "in late June, a conference held under Saudi auspices of the so-called 'National Liberation Army of Iran' was held in Paris. The event was attended by the former chief of Saudi intelligence, Prince Turki bin Faisal," (an official that some experts credit with the creation of al-Qaeda). "At the conference, the former official called for the downfall of the Iranian government."

"In other words," the analyst noted, regional powers, and Turkey and Iran specifically, really "do have common challenges. One of them is the Kurdish factor, which stretches across borders. For this reason, it's logical that Russia, Iran and Turkey are trying to develop new rules of the game in the region – to create a new state of affairs without outside interference."

In any case, the analyst said, "it's obvious that for now we are not going to see details on any specific agreements which may have been reached. After all, their respective societies must be prepared for them." This applies to Turkey in particular, Mavashev noted.

At the same time, Semyon Bagdasarov, a prominent Russian expert in Middle Eastern and Central Asian affairs, suggested that for its part, Moscow must understand very clearly what goals it wants to achieve in northwestern Syria.

Russia-Turkey Summit’s Message: ‘Europe is No Longer the Center of the World’
"Ankara's concern is understandable: the Kurdish Federation of Northern Syria, supported by the US, serves as a springboard which threatens to destroy Turkey, since the territory is a base not only for the forces of the YPG, who are affiliated with the Turkish PKK (Kurdistan Workers Party), but also for the Turkish Marxist-Leninist Communist Party," whose volunteers have joined the YPG fighters.

"For Tehran too, the formation of a Kurdish arc in Syria must also be frustrating, because Iran itself faces skirmishes between the Revolutionary Guards and local Kurdish forces," the analyst added.

Ultimately, Bagdasarov suggested that "the main problem is that closing the border with Turkey would also mean destroying the infrastructure from which the US and Persian Gulf monarchy-supported militants get their supplies. This will change the situation in Syria, including in Aleppo. But will the Americans really allow the Turks to do so? On the one hand, they cannot let on that they are giving in to Ankara's blackmail. On the other hand, they can't deprive their allies of rear bases. My opinion is that Erdogan will be subject to continued pressure," which will make it very difficult for him to hang on to power.

000000
Popular comments
The bottom line is that the US government is an aggressive provocateur and too many of its citizens support that. And the only way to prevent a disaster, perhaps nuclear war, is for countries of that region to make joint efforts for peace, and defend one another when necessary. All who want peace and love in this world must unite against the neocons and whoever else is constantly behind any confrontation and violence. It now appears that the West is making moves to destabilize Thailand. This just can't continue. journal-neo.org/2016/08/14/thailand-gets-the-libya-syria-treatment
jas
14 August 2016, 17:59 GMT7
000000
This union is not only practical, but potentially a very potent world force, culturally, economically, and militarily. If someone isn't proactive about peace in the Middle East, the US (NATO), Saudi Arabia and Israel seem to be willing to maintain perpetual chaos as they consistently get what they want at the expense of others.
jas
14 August 2016, 18:51 GMT4
000000
Newsfeed
0
New firstOld first
loader
LIVE
Заголовок открываемого материала
Access to the chat has been blocked for violating the rules . You will be able to participate again through:∞. If you do not agree with the blocking, please use the feedback form
The discussion is closed. You can participate in the discussion within 24 hours after the publication of the article.
To participate in the discussion
log in or register
loader
Chats
Заголовок открываемого материала
Worldwide
InternationalEnglishEnglishMundoEspañolSpanish
Europe
DeutschlandDeutschGermanFranceFrançaisFrenchΕλλάδαΕλληνικάGreekItaliaItalianoItalianČeská republikaČeštinaCzechPolskaPolskiPolishСрбиjаСрпскиSerbianLatvijaLatviešuLatvianLietuvaLietuviųLithuanianMoldovaMoldoveneascăMoldavianБеларусьБеларускiBelarusian
Transcaucasia
ԱրմենիաՀայերենArmenianАҧсныАҧсышәалаAbkhazХуссар ИрыстонИронауОssetianსაქართველოქართულიGeorgianAzərbaycanАzərbaycancaAzerbaijani
Middle East
Sputnik عربيArabicArabicTürkiyeTürkçeTurkishSputnik ایرانPersianPersianSputnik افغانستانDariDari
Central Asia
ҚазақстанҚазақ тіліKazakhКыргызстанКыргызчаKyrgyzOʻzbekistonЎзбекчаUzbekТоҷикистонТоҷикӣTajik
East & Southeast Asia
Việt NamTiếng ViệtVietnamese日本日本語Japanese俄罗斯卫星通讯社中文（简体）Chinese (simplified)俄罗斯卫星通讯社中文（繁体）Chinese (traditional)
South America
BrasilPortuguêsPortuguese
NewsfeedBreaking
01:49 GMTDHS Looks to Staff Gitmo Migrant Facility With Guards Who Speak Haitian Creole Amid US Border Surge
01:30 GMTRussian Crew Leaves Boat Pilgrim in Alaska, Will Renew World Trip Next Spring - Captain
01:00 GMTWall Street Up Broadly as Fed Signals Caution With US Stimulus Taper, Rate Hike
00:45 GMT‘This Moment Demands Action’: Biden Eyes Executive Actions After Fruitless Police Reform Talks
00:26 GMTMoroccan Liberal Parties Form Coalition Government, Ousting Islamists After Decade of Rule
00:00 GMTIAEA Must Have Access to Nuclear Fuel for Australian Submarines - Iranian Envoy
YesterdayFDA Authorizes Pfizer Booster Shots for Elderly, At-Risk Americans
YesterdayTurkey Should Withdraw From Syria, End Occupation of Territories - Syrian Foreign Minister
YesterdayPentagon Says Aware of Reports of Poor Conditions at Military Base Housing Afghans
YesterdayUK Announces Plans to Become AI Innovation Superpower Within 10 Years
YesterdayUS Man Pleads Not Guilty to Capitol Bomb Threat After Livestreaming Police Standoff
YesterdayCroatian Police Partially Solve Mystery of Lone Woman Found on Island With No Memory
Yesterday‘Earth Looks Fragile from Space:’ Jeff Bezos Pledges $1 Billion to Tackle Climate Crisis
Yesterday‘World’s Coolest Dictator’: El Salvador’s Bukele Changes Branding on Twitter Amid Protests
YesterdayCzech, Hungarian Prime Ministers Slam EU for Poor Border Protection From Illegal Migrants
Yesterday‘We’re Done With Fear’: Florida Appoints Joseph Ladapo as State’s New Surgeon General
Yesterday'Difficult Decision': Facebook Chief Technology Officer to Step Down From Post
YesterdayGrandmothers Know Best: Cristiano Ronaldo’s Mother Believes Her Grandson is a Star in the Making
YesterdayStates to Provide Cash for Each COVID Death: Modi Gov't to Top Court
YesterdayLeaks Reveal UK Equalities Minister Dismissed Colonialism, Mocked Trans People