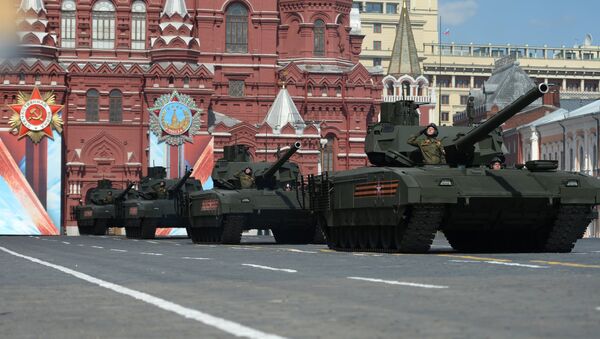 Russian Defense Minister said that Russia strictly sticks to the plan on rearmament and development of its army.

VLADIVOSTOK (Sputnik) – Russia strictly sticks to the plan on rearmament and development of its army, Russian Defense Minister Sergei Shoigu said on Sunday.

"For five years we have been following the well-thought plan on development and rearmament of the armed forces. These plans were coordinated with all manufacturers and the Ministry of Industry and Trade. And now, the rearmament, retraining of military personnel and re-equipment are ongoing….We strictly stick to the plan," he told the Rossiya-1 broadcaster.

Report: Russia's Hypersonic 7680MPH Nuclear Glider Armed With ICBMs Almost Ready
Russia is currently implementing a large-scale rearmament program, announced in 2010, to modernize 70 percent of its military hardware by 2020. The total modernization program cost is estimated to reach about 20 trillion rubles (some $291 billion at the current exchange rates).

Western countries should stop "stirring up hysteria" intimidating its own population and understand that Russia is ready and open for dialogue, Russian Defense Minister said.

"What are we opposing? We say… there is a balance. If you use the current situation, stirring up the hysteria to refill your budget so that the plants get additional profit – that is your issue… But I would like to say: stop intimidating your population… We want our colleagues to stop at some point and understand that we are open and ready for dialogue," Shoigu told Rossiya-1 TV-channel.

Relations between Russia and western countries deteriorated in 2014 after eruption of the Ukrainian crisis.

The United States, European Union and some of their allies have introduced several rounds of anti-Russia sanctions since Crimea reunified with Russia in 2014, and accused Moscow of meddling in the Ukrainian conflict. Russia has repeatedly refuted the accusations, and warned that the sanctions are counterproductive and undermine regional and global stability.