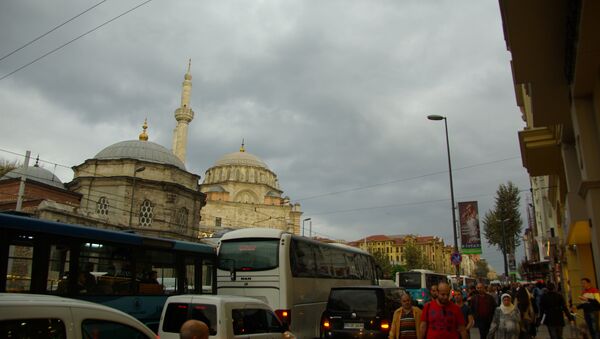 © Flickr / Pieter Edelman
Subscribe
International
India
Africa
Sputnik has decided to talk to businesspeople in the Istanbul district of Laleli, a famous tourist and shopping area popular among Russian tourists, about what changes they expect in Russian-Turkish relations following last week's meeting between the Russian and Turkish presidents. Most are hoping for positive change, but admit this will take time.

Among the small businessmen Sputnik Turkey spoke to was Isa Ozturk, who has had a retail store in Lalei for many years. Ozturk suggested that the meeting between President Putin and President Erdogan will have a very important economic effect in the long term. Specifically, he noted, if the ban on charter flights is lifted, and a visa-free regime is restored, Laleli market will see a revival.

"Earlier, before the crisis [in relations], this place was teeming with commerce; all the stores were filled with shoppers," the entrepreneur noted.

Russo-Turkish Tourism Business Back on Track Following Negotiations
Now, Ozturk added, "following the negotiations between the two countries, we have at least a little hope for an improvement in the situation. Most likely, the results will be visible next year." Specifically, the businessmen noted, "the issue of visas and charter flights is very important, both for the tourism sector and for us. People will be able to come, buy our goods and take them back home. A revival of commerce will begin."

For his part, Hasan Ciftci, an entrepreneur from Laleli with nearly a quarter century of experience in retail, said that he was happy by the apparent steps to normalize relations between Turkey and Russia, but isn't hoping for things to return to normal any time soon for retail.

"It's great that relations between the two countries are improving. But it's naïve to think that this will lead to a quick fix for everything. Russia too now faces economic troubles, and so we are not expecting any rapid changes. Our situation began to deteriorate two years ago, when the flow of Russian tourists began to gradually decrease. We get many tourists from Arab countries, but this has not improved the situation – they want to buy everything at very low prices."

"Right now there are no Russian tourists," Ciftci noted. "The streets are empty. Often we close our stores without selling anything for the whole day. Now it's difficult to pay the rent for the retail space. Right now many shopping centers sit empty, no one is willing to rent them, and there is no work. Retailers have accumulated a lot of debt, but can't make a living. The government needs to come here and see what's going on with its own eyes. We need their support."

'Sudden Reconciliation': How German Media Assess Putin-Erdogan Meeting
For his part, retailer Yasin Demir told Sputnik that he too does not expect a rapid improvement, but remains optimistic for gradual changes for the better. "We have lived through a serious crisis in relations with Russia. Now, there are still many difficulties with regard to trade between our two countries, and they are not easy to overcome. I don't think we will be able to get back on our feet any time soon. Our economic situation was not very good even before the incident with the Russian plane, and after that things got very bad. We can only hope for the best, and there is hope – it came after the meeting between the presidents. We will need time to get back on our feet. Such things cannot be fixed in a day."

Finally, Munir Demir, another Laleli retailer with twenty-five years of experience, said that he has never seen a situation as difficult as the one at present.

"I have never encountered such a difficult situation before, either in domestic or foreign markets. God willing we will cope with this and will be able to get back on our feet. In this respect we look forward to next year. We are concerned not so much for ourselves as for the future of our children. We sincerely believe that the outcome of the negotiations between Turkey and Russia will have a positive effect on our situation," the entrepreneur noted.