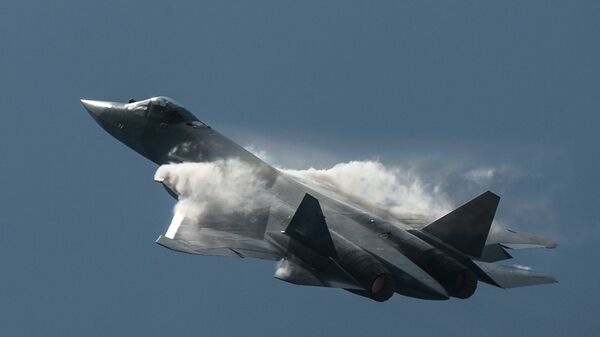 The Ministry of Defense released incredibly footage of the next generation T-50 fifth generation fighter jet as well as a number of other high performance Russian aircrafts to celebrate Russia’s Aerospace Forces.

The super stealth fighter jet reaches a max speed of 1,516MPH (2,440kmh) with an astounding battle range of 3,418 miles with maneuverability and combat characteristics leading most defense analysts to deem the aircraft better than America’s F-22 Raptor which has long held the distinction as the most fearsome warplane to grace the skies.

​The PAK FA T-50 has been somewhat controversial in Moscow circles due to its hefty unit cost, exceeding $50 million per aircraft, which far exceeds the cost of other Russian aircraft although coming in at a bargain basement price and with far greater capabilities when compared to the budgetary eyesore that is America’s F-35 stealth fighter. Not only does the T-50 have superior maneuverability compared to the F-35, but it also travels at a 30% higher speed with a range over 2,000 miles farther.

Although the debate rages on in Moscow whether the battlefield benefits of high-cost stealth aircraft technology is worth the money, the Russian Aerospace Forces will have the opportunity to put an initial purchase of a dozen such aircraft to the test in operational settings allowing Russia to garner more information before making a more expansive investment in the program.

In June, the T-50 was deemed by defense industry sources to have “reached a stage where it’s combat capable and ready for mass production and for use by the Russian Aerospace Forces.”