‘Chaos in the Kremlin’? Putin Welcomes Second Chief of Staff, Obama on his Fifth 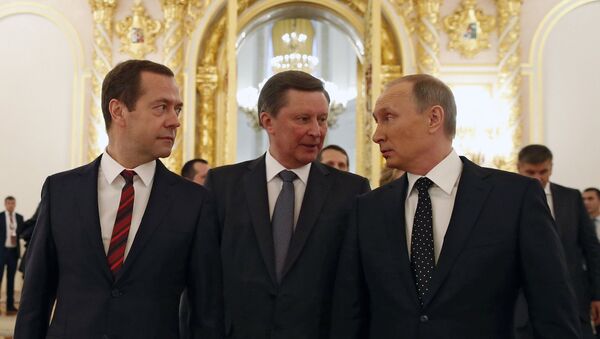 © Sputnik / Dmitry Astakhov
/
Go to the mediabank
Subscribe
International
India
Africa
The Western media entered full meltdown mode spinning conspiracies of a crisis among Russia’s leadership or a plot by President Vladimir Putin to push out rivals, but in reality a loyal ally moved on to a less stressful role.

Vladimir Putin named 44-year-old Anton Vaino to the post that calls for drafting laws that are to be submitted to the Russian parliament, monitoring legislative process, and conducting analysis of trends in domestic and foreign affairs to keep the president apprised.

In the late 1990s, when Putin was the chief of the Federal Security Service (FSB) he had appointed Ivanov as his deputy calling him one of the five people that he trusted the most which in part was why the chief of staff’s sudden departure had caught Western analysts by surprise.

However, rumors have persisted about Ivanov’s departure since 2014 after his health began to deteriorate in the wake of the tragic drowning of his son off the coast of the United Arab Emirates.

The 63-year-old Ivanov will remain active in Russia’s political circles serving as the special representative for environmental and transportation issues, a more low-key role covering issues that are dear to the former chief of staff.

Ivanov was recently credited for taking the initiative to protect endangered leopards and tigers by forging the construction of the Narvinskii Pass tunnel allowing the endangered big cat to avoid a deadly highway on their annual pilgrimage between Russia and China.

The Western media opines that Ivanov shifting his focus towards an issue that has been great importance to him is outlandish with the BBC saying "that a man once touted as a potential president, suddenly wanted to run Russia’s environmental policy – has been met with great skepticism."

Timothy Ash, a strategist at Nomura bank similar speculates that Putin removed Ivanov out of concerns over his popularity ahead of elections, despite recent news that Russia is set to break out of the worst recession in two decades, and that he is trying to consolidate power against rivals.

"There has been evidence that Putin has been further concentrating power, with the creation of a presidential guard, and I thik this is further evidence of this – removing potential rivals," Ash said.

However, lost in the media speculation is how often the right-hand man of Western leaders tend to change. President Barack Obama started with Rahm Emanuel who only survived 22 months before being culled, but that was much longer than Pete Rouse who lasted a whopping three months. Still there were no reports of attempts by Barack Obama to consolidate power against rivals or chaos among the ranks.

Then there was Bill Daley, the youngest child of corrupt Chicago Mayor Rich Daley who survived a year before Jack Lew stepped into his place surviving just under 12 months himself. Perhaps the Obama administration, by the same calculus, has gained some semblance of stability since Obama’s revolving door of right-hand men during his first term having held onto Denis McDonough since Jan. 20, 2013.

With Vaino the Russian people get a youthful analyst and career diplomat who had the benefit of cutting his teeth under the tutelage of Ivanov and an adviser to President Putin who analysts describe as focused on finding peace before conflict and the country’s endangered species just got the best possible full-time advocate in Sergei Ivanov.