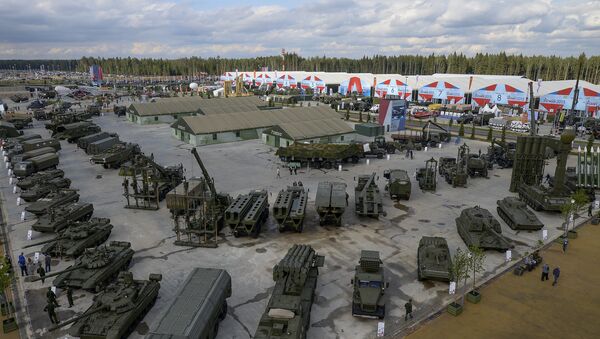 © Sputnik / Alexander Vilf
/
Go to the photo bank
Subscribe
During the upcoming Army-2016 military expo, the visitors will be able to observe and inspect cutting-edge military hardware that is so far only available in Russia.

Top Russian defense contractors are expected to present their finest merchandise to prospective buyers from all over the world.

"Analysis of this type of events, which are held under the auspices of the Russian Defense Ministry, shows that we've managed to bring together developers, manufacturers and consumers of military and double-purpose hardware, and provide them with comfortable conditions for cooperation," Maj. General Kordyukov explained.

New Russia's Armata Tank Control System to Be Unveiled at Army-2016 Expo
The general also said the results of the last year’s forum have shown that Russia’s foreign partners are quite interested in visiting such events. According to Kordyukov, the Army-2016 forum is expected to be attended by military delegations from virtually every corner of the world, including members of the Collective Security Treaty Organization, Shanghai Cooperation Organization, BRICS, along with a host of Asian, Middle Eastern, European, African and American nations.

The participants of the forum will engage in a variety of events, including round-table panels, conferences and briefings. The forum itself will be held on the premises of the Patriot Congress and Exhibition Center, along with the Alabino testing range and Kubinka airfield.

The International Military Technology Forum Army-2016 is scheduled to be held in Kubinka, a western suburb of Moscow, on September 6-11.

000000
Popular comments
Russia shouldn't show all like that. New equipment should be kept from unveil for 10 years after reg mil induct it. IF is special forces etc then NOT until reg mil have it 10 years. NO exports either. No to show complete the new aerospace engines. CHINA , U.S, E.U , NATO will spy to copycat. Protect Russian interests.By all means. Russia needs to expand popualtion. Get Syrians to live by south. BIG camps wjetre tehy can work. then send back to Syria. west wanta to indoctrinate them and turn them against ASSAD and then VOTE against ASSAD .. Russia should NOT allow Russians abroad to VOTE in Russian elections. And add local and national referendum's. To keep Russian's involved in Russia. This is great opportunity to create alliances. Perhaps. Permanent Aerospace bases, with army around, and NAVY with marines. 7,000 between both BIG bases. Venezuela may like one. Russia can get it free, in exchange of protection in case of ANY attack. And the country will get involved IF Russia get in war and need it.. GO FOR IT. AEROSPACE bases SHOULD be capable of hosting 2 or 3 carriers amount of planes etc sorted. BUT keep less during no need due to peace times.. And could host Russian extra planes etc when Russia do competitions in the country too!! Int competitions could be at other countries hosting too. Then mobilization could be a real comp part. How about all countries betting!!! bet on militaries to win .. bets for the first 3 places. And the nations could each help pay for a gold , silver , bronze REAL BAR, to be awarded to winning teams to GIVE to their military or country. The bars then could be replaced by FAKE and the real given in gold or cash.
cast235
13 August 2016, 16:56 GMT
000000
Newsfeed
0
New firstOld first
loader
LIVE
Заголовок открываемого материала
Access to the chat has been blocked for violating the rules . You will be able to participate again through:∞. If you do not agree with the blocking, please use the feedback form
The discussion is closed. You can participate in the discussion within 24 hours after the publication of the article.
To participate in the discussion
log in or register
loader
Chats
Заголовок открываемого материала
Worldwide
InternationalEnglishEnglishMundoEspañolSpanish
Europe
DeutschlandDeutschGermanFranceFrançaisFrenchΕλλάδαΕλληνικάGreekItaliaItalianoItalianČeská republikaČeštinaCzechPolskaPolskiPolishСрбиjаСрпскиSerbianLatvijaLatviešuLatvianLietuvaLietuviųLithuanianMoldovaMoldoveneascăMoldavianБеларусьБеларускiBelarusian
Transcaucasia
ԱրմենիաՀայերենArmenianАҧсныАҧсышәалаAbkhazХуссар ИрыстонИронауОssetianსაქართველოქართულიGeorgianAzərbaycanАzərbaycancaAzerbaijani
Middle East
Sputnik عربيArabicArabicTürkiyeTürkçeTurkishSputnik ایرانPersianPersianSputnik افغانستانDariDari
Central Asia
ҚазақстанҚазақ тіліKazakhКыргызстанКыргызчаKyrgyzOʻzbekistonЎзбекчаUzbekТоҷикистонТоҷикӣTajik
East & Southeast Asia
Việt NamTiếng ViệtVietnamese日本日本語Japanese俄罗斯卫星通讯社中文（简体）Chinese (simplified)俄罗斯卫星通讯社中文（繁体）Chinese (traditional)
South America
BrasilPortuguêsPortuguese
NewsfeedBreaking
16:06 GMTAUKUS Will Not Have Any Impact on Quad, Says Indian Foreign Secretary Ahead of Leaders' Summit
16:02 GMTUS Space Force Commander Claims Russia Has Armed Satellite in Orbit to Destroy US Assets
15:54 GMTLust For Money, Not Sex Game, Killed British Heiress, Swiss Court Has Heard
15:40 GMTUS Sanctions Russia-Based Cryptocurrency Exchange Platform SUEX OTC
15:29 GMTMessi to Miss PSG's Next Game Against Metz as Club Confirms Argentine's Knee Injury
15:20 GMTScientists Developing Versatile ‘Nano Couriers’ for Future Medicine
14:56 GMT'To Ban or Not to Ban': US Agencies Reportedly Split on Whether to Blacklist Huawei's Spinoff
14:28 GMTSotheby's to Hold First-Ever Art Sale Show in Post-Soviet Russia
14:19 GMTSpanish Island of La Palma's Airport Operating Normally Amid Volcano Eruption
14:11 GMTAt UN, Biden Boasts About 'Era of Relentless Diplomacy', Calls Military Power 'Tool of Last Resort'
13:34 GMT6.3-Magnitude Quake Rocks Chile
13:30 GMT'Promoting Safe Sex': Actress' Look at Emmy Awards 2021 Gets Compared to Condom by Netizens
13:12 GMTMoscow: US Failed to Discredit Russia's Electoral System
12:59 GMTWorld Leaders Participate in First Day of 76th UN General Assembly
12:54 GMTDaniel Craig to Exit James Bond Role, Says Next 007 Shouldn't Be a Woman
12:54 GMTRussia's Foreign Ministry Slams EHRC Ruling on Litvinenko's Death for Promoting Russophobia
12:34 GMTMoscow Blasts Britain’s Effort to Blame Russia for 2018 Poisonings as UK Charges Third Suspect
12:12 GMTSudanese Prime Minister Believes Coup Attempt Reveals Need for Army Reform
11:58 GMTEU Commissioner Warns ‘Something is Broken’ in Transatlantic Ties in Wake of AUKUS Sub Snub
11:58 GMTUK is 'Heading Back to Oligopoly' in Energy Sector, Bankruptcies on the Way as Prices Surge: Expert