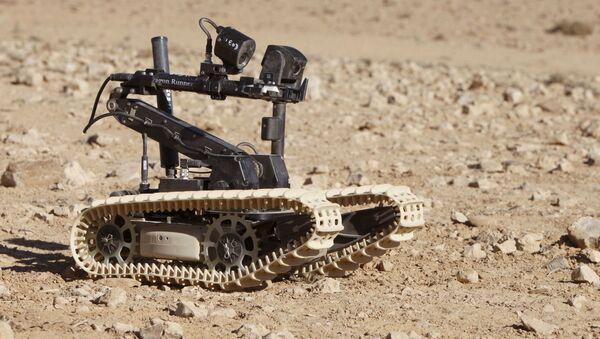 © Photo : UK Ministry of Defence
Subscribe
The UK is planning to spend over 800 million pounds (almost US$1 billion) on advanced military technology, including "dragonfly drones" and laser weapons.

UK Defense Secretary Believes Brexit to Promote Defense Sector Revolution
Defense Secretary Michael Fallon is set to announce an innovation unit to support cutting-edge technology, companies and individuals, to put forward new ideas to a panel of experts. The best projects will be backed by the government.

In the rapidly shifting war against terror, several examples of the future of next generation military technology have been revealed. Mr Fallon has hailed the Ministry of Defence’s investment to "ensure that the UK maintains its military advantage in an increasingly dangerous world.”

So what can we expect from £800 million worth of military hardware?

Despite a name that sounds like a Star Trek prop, this instrument, used to measure the difference in the force of gravity from one place to another, will be used to survey enemy tunnels and discover underground bomb stores.

The device is currently in the design stage at the University of Birmingham, but once completed, it's expected to help soldiers gather intelligence on jihadists in Syria and Iraq in a matter of minutes, rather than weeks.

No longer just the toys of gamers, the world of virtual reality (VR) interactive technology will be used to help train the next generation of military pilots.

They will create an immersive environment in which pilots will be able to train on the ground, rather than in the skies, using simulated air strikes.

​Aircraft, land targets and enemy soldiers will all appear on the real surrounding landscape.

A new "micro-drone" with flexible, flapping wings inspired by dragonflies will weigh less than two pound coins and fit into the palm of a soldier's hand.

It's expected to bug enemy assailants, and in partiuclar, to have a significant impact on operations in urban environments.

​It will be equiped with a camera and a microphone for covert surveillance, night or day; have high speed obstacle avoidance technology and the ability to fly up to 45mph.

No longer just a gag from the Austin Powers movies, threatening the enemy with giant lasers will soon be a reality.

​The MoD say the lasers will be able to neutralize aerial threats in multiple ways: by downing aircraft by burning holes in them; by blinding aircrew in the cockpit and forcinga landing or by disrupting sensors on enemy planes, preventing them from working.

If the presence of chemical weapons is suspected, these small robots could be deployed instead of soldiers, to minimise the risk to human life.

​They will help scout out hazardous or contaminated environments before troops are committed to the field.