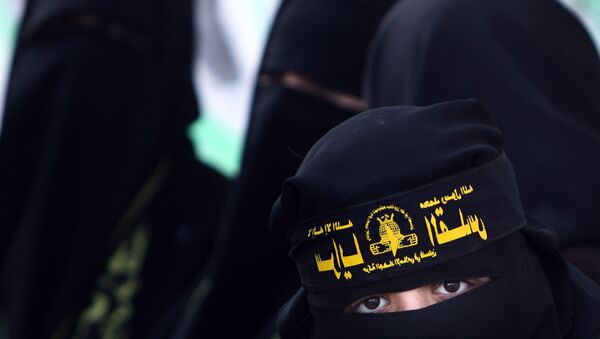 © AFP 2023
Subscribe
International
India
Africa
An MP in Britain has joined renewed calls for a review of the UK government's counterextremism program, Prevent, following revelations a London teenager, who fled to Syria to join Daesh, has been killed in an airstrike.

Schoolgirl Kadiza Sultana left her home in east London in February 2015 with two friends. Sultana is reported to have died in the Daesh militant's stronghold in Raqqa. The three girls are thought to have been groomed online by radicalized members of Daesh — also known as ISIL — before choosing to abandon their studies and board a flight bound for Turkey and married jihadis in Syria.

Rushanara Ali, MP for Bethnal Green and Bow, told British media that she had deep concerns over the UK government's Prevent program which is aimed at preventing people from becoming involved in extremism by funding local authority initiatives.

"There needs to be a balance struck to protect young people, to prevent them from being radicalized, but also making sure teachers and other agencies have the proper advice training and support," she added.

Ali's concerns have been raised not long after other MPs accused the counterextremism program of creating "tensions" among British Muslims and increasing inequality.

Maria Miller, chair of the Women and Equalities Committee said Muslims remain the most disadvantaged group in Britain, with unemployment levels double that of the general population. Young women account for two thirds of economically inactive Muslims, according to the committee's report.

Government needs to tackle disadvantage faced by Muslims in their own right not through lens of counter-extremism https://t.co/LiXe6Bk220

The groups report is calling on the government to implement a more "coherent plan" specifically aimed at improving life chances for Muslims and for more clarity between policies aimed at strengthening integration and those targeting extremism.

"We do not underestimate the challenges the government faces in tackling extremism, but the conflation of integration with counterextremism has exacerbated inequalities experienced by Muslims," the report states.

For teachers #Prevent is confusing. For students & parents it is alienating. It does nothing for community relations https://t.co/MnnDgdwgv0

"The government needs to tackle the disadvantages faced by Muslims in their own right, not through the lens of counter extremism."

With equal concerns about Prevent, Rushanara Ali, MP for Bethnal Green and Bow told the Today program in Britain that she had, "huge concerns about some of the ways in which it's implemented; some of it can be quite misguided. The government needs to be a proper assessment of what's working and what's not and listen to the Muslim community and the dangers the Muslim community face."

Sara Khan, founder of Inspire, a counterterrorism organization said Sultana was a victim of online grooming.

"I do see her as a victim because she's not an adult. I've come across numerous cases of young girls — girls as young as the age of 13 — who have been radicalized online or within communities."

"Prevent has not succeeded in staunching terrorism. Reports have concluded that the Prevent regime of attempting to stop young Muslims from being radicalized is not working and is simply alienating Muslims in Britain by serving as a cover for intelligence gathering on the community."

During an interview with Sputnik in 2015, Professor Hamed El-Said, a counterterrorism expert from Manchester Metropolitan University said: "The UK deradicalization program is no known to be among the most comprehensive or successful."

"It is shrouded in secrecy and therefore, remains under researched, understudied and as such, little is known about its effectiveness."

Baroness Manningham Buller, former head of MI5 told Lords that Prevent is "clearly not working" not long after the Charlie Hebdo office was attacked by Islamic extremists in Paris.

The Baroness said the decision taken by 600 Britons to travel to Syria and Iraq to join Daesh was evidence enough the program had failed.