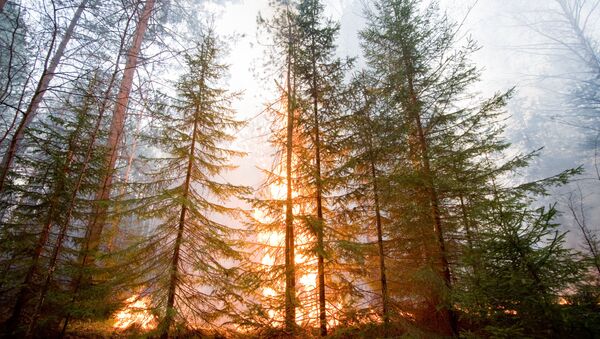 Portugal has asked Russia for help in extinguishing forest fires, head of the press service of the Russian Emergencies Ministry, Alexei Vagutovich, told Sputnik, and Russia is happy to help out.

“Yesterday, Portugal sent a request to Russia, asking for help in extinguishing forest fires. As the Russian Emergencies Ministry, we are always ready to help but only if we will receive the go-ahead from the government,” said Vagutovich.

The planes, which are able to carry 12,000 liters of water, will be based at Monte Real in Leiria. They are scheduled to being their operations in Portugal tomorrow.
The Beriev Be-200 Altair plane is one of the world’s most effective aircraft in extinguishing forest fires. The plane splashes down on a lake and, in a few seconds, takes in up to 12.5 tonnes of water, which it then drops over the fire.

“The aircraft’s crew is used to working in difficult conditions and has extensive experience fighting fires. Emergencies Ministry aviation was used in other countries as well such as Serbia, Greece, Chernogoria and others,” said a source at the Emergencies Ministry.

Portuguese authorities report fires continuing to rage on the mainland of Portugal, although the situation has greatly improved over the past day.

On August 12, according to Portugal’s request, Russian Emergencies Ministry will send two Beriev Be-200 Altair planes to Portugal to help in extinguishing forest fires.

Spanish Meteorological Agency Declares High Risk of Wildfires Due to Heat Wave
Anytime today, the aircraft will take off from the Ramenskoye airfield.

On August 10, Portugal adopted the European Civil Protection Mechanism, which is supposed to help the country deal with emergencies such as wildfires.

However, the European Union announced that the availability of air assets is limited because of serious forest fires, which many member countries have to face, announced the Portugal edition Diario de Noticias.

The most difficult situation currently being experienced are in the districts of Aveiro and Vila Real, where about 6, 000 people are currently involved in fighting the fires.