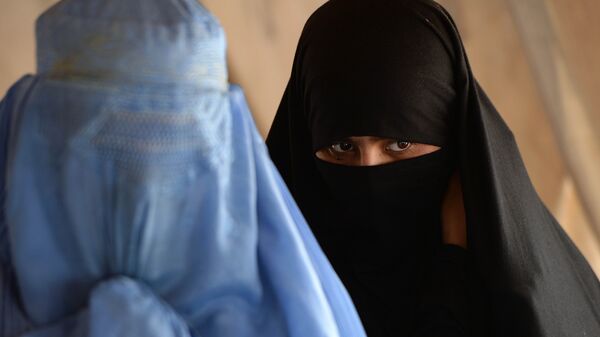 The right-wing populist Danish People's Party, which in its home country enjoys the reputation of an enfant terrible, has recently made headlines. Whereas its demand for a burka ban is not exactly new, its recent proposal to curb immigration through ignoring international agreements has stirred up a hot debate.

Hijab, Niqab or Burka? Norway Can't Choose Which One Is Good
Face-covering head garments, such as the burka or the niqab, should be banned for ideological and security reasons, the Danish People's Party's EU spokesman Kenneth Kristensen Berth argued in an interview with the Danish tabloid newspaper Metroexpress.

"No one could possibly convince me that anyone would wear such a garment of their own accord," Berth noted.

According to him, burkas represent female oppression, but can also be used as a disguise for suicide bombers. "It is only a matter of time before similar incidents occur in Europe. The only reason it has not happened yet is that burkas still attract attention here."

Back in 2009, Copenhagen University estimated 100-200 Danish women were wearing a burka on a regular basis in the so-called "Burka report." According to Berth, this figure has risen greatly since then, which undermines public security by making it difficult to identify potential terrorists.

Germany's New Counter-Terrorism Plan: Burqa Ban, More Police and Surveillance
According to Berth, his party was inspired by Germany's Interior Minister Thomas de Maizière, who previously announced a ban on burkas as part of the new reform package dubbed "Increased Security for Germany."

"I think this is the right thing to do, and it is good there is at least someone who is following in France's footsteps," Berth told Metroxpress.

​In September 2010, France became the first country in Europe to outlaw Muslim face veils and other face-covering headgear in public places. Belgium and the Netherlands took the cue from their southern neighbor and followed suit soon thereafter.

From elegant, on the left, to downright menacing, on the right.#Hijab to #Burka pic.twitter.com/UbytbDJKfa

​Despite being a topical issue in many European countries, the burka ban is only the tip of the iceberg for the Danish People's Party.

Slippery Slope: Denmark Bets on Mosques to Promote Integration
Recently, party leader Kristian Thulesen Dahl called for drastic measures to handle the ongoing migrant crisis and safeguard the government's control over the issue. Above all, the Danish People's Party advocates permanent border controls and a strategy for returning migrants to their home countries. Most startling, however, is their demand for the right to denounce international agreements in order to handle what they believe to be "the greatest challenge for the next decade," which clearly overshadows other issues.

"These are old texts that do not relate to the challenges we face today. And it's high time we did something about them. <…> In case anyone wonders how this is going to work or whether the law stands in the way: we are politicians, we make laws," Dahl said, according to Swedish national broadcaster SVT.

According to this initiative, a number of major conventions are endangered, including the UN Refugee Convention, the European Convention on Human Rights and the UN Convention on Stateless Persons.