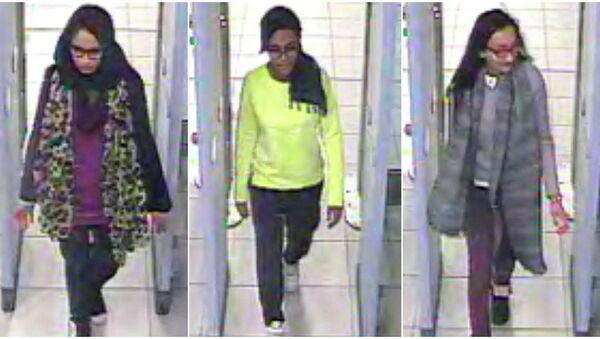 One of three British teenagers referred to as “Jihadi Brides,” who left their families to join the violent Daesh extremist group, is believed to have been killed in an airstrike in Raqqa, according to a lawyer for the teen’s family.

Kadiza Sultana, one of three London teenagers who abandoned both family and A-level courses in the town of Bethnal Green of London Borough, joined Daesh, a jihadist group outlawed in Russia and many other countries.

According to Tasnime Akunjee, the lawyer for the Sultana family, the teen is believed to have been killed during an airstrike on Raqqa, the de-facto capital of Daesh. According to media reports, the airstrike was conducted by Russian air forces several weeks ago.

According to Akunjee, Sultana's family received reports of her death from sources in Raqqa a few weeks ago, but have not been able to independently confirm the details. The fate of the teen remains unknown.

According to a report by the Daily Telegraph, the three teenagers stole jewelry from their families to pay more than £1,000 to a local travel agent for flights to Turkey.

It is believed that all three wed fellow foreigners fighting for Daesh. Kadiza's husband was an American national of Somali origin who died late last year.

The teens' actions sparked controversy in Britain. Sir Bernard Hogan-Howe, the head of London's Metropolitan Police, stated that they will not face terror charges if they return to Britain.

The teens are three of some 800 UK citizens who have left country to join Daesh. Almost half of this number have returned, and some have faced criminal charges for terrorism, while others have been allowed to re-enter society, under the watch of security services.

The fate of the two remaining teenagers is unknown. According to ITV, "There is no suggestion that either Amira Abase or Shamima Begum have given any hint of disillusionment with [Daesh]."