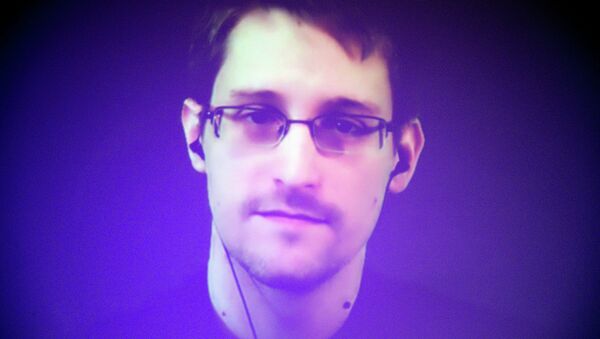 © AP Photo / Charles Platiau
Subscribe
International
India
Africa
An unexplained tweet issued on the whistleblower’s account sparked concern over his physical safety, tracing to a bitcoin transaction in the amount of "0.000911" leaving some wondering if it is a cyber distress signal.

Edward Snowden’s unexplained tweet of a 64-character hex code on Friday led many to question whether the message was a “dead man’s switch,” an automatic message set to release if the user is killed or captured, which, in that event, would prompt friends and journalists to release documents.

Alternate narratives were quickly proposed, including one purported to be by the whistleblower’s girlfriend, saying that he had been killed, while others speculated that the encrypted tweet, which was quickly erased, was a signal by an alive and well Edward Snowden, ahead of a major document release.

Concerns for the whistleblower subsided late Saturday when journalist Glenn Greenwald responded to a query via Twitter about Snowden’s safety, saying that, “he’s fine.” The message was mirrored, albeit not in direct terms, by journalist Barton Gellman.

Still, mystery shrouds Snowden, whose account has been inactive for over 160 hours, an unprecedented time period for the outspoken civil liberties champion, after his mystery tweet, which was preceded by the similarly cryptic message, "it’s time," only days earlier.

Internet sleuths on Reddit believe that they may have deciphered what Snowden was trying to convey to the public, a message that is sure to create a new wave of concern for the safety of the man responsible for the single most substantial document leak in US history, exposing the NSA’s rampant and illegal campaign of mass international and domestic surveillance.

User Bobanaut, on the bitcoin subreddit, tested Snowden’s message as a private key hash on the bitcoin blockchain, which traced to transactions between two addresses on Sunday. The first transaction logged was in the amount of 0.000911 BTC, suggesting that Snowden was using the cryptocurrency to convey a cryptic 911 distress signal, after the emergency telephone number used in the United States.

"I think the transaction sum of 0.000911 BTC could be a call for help," opined Bobanaut. Other commenters pointed out the statistical impossibility that the 64-character hex code used by Snowden could be an unintentional hash in a bitcoin transaction.

Bobanaut suggests that Snowden’s tweet was conveyed either by him as a signal of distress or possibly by another actor, employing their talents to sew mass confusion as part of an exploit to troll the internet, recreating Snowden’s hash key in a bitcoin transaction.

Most people, however, simply want to be sure that the anti-surveillance hero is alive.