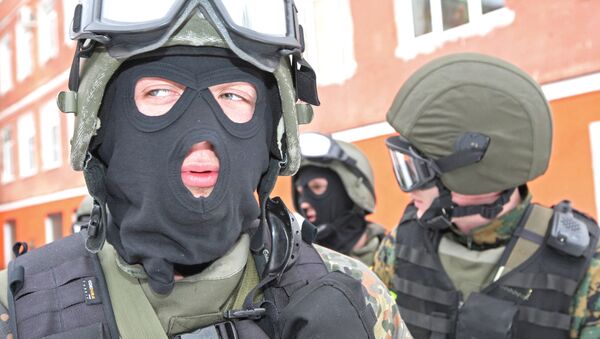 MOSCOW (Sputnik) — The Russian Federal Security Service (FSB) has cracked down on an extremist group that was recruiting militants for Daesh over the Internet, the FSB press center said Thursday.

"[The FSB] acting in coordination with the Interior Ministry uncovered the activities and dismantled cells of the international Internet community Rohnamo ba sui davlati Islomi ['guidebook to Daesh' in Tajik] on the territory of the Sverdlovsk, Tyumen and Chelyabinsk regions, which was created to propagandize terrorist ideology, recruiting militants into Daesh, as well as to raise money to fund this terrorist organization," the press center said.

It is noted in the statement that the security services carried out 27 raids on the apartments of Rohnamo members in the Sverdlovsk, Tyumen and Chelyabinsk Regions on August 10.

Daesh Threats Unable to Derail Russia's Fight Against Terrorism
According to the FSB, the Rohnamo community comprises over 100,000 people mainly from Central Asia and its activity is being coordinated by moderators from different states, including Russia and the Middle East.

The FSB investigative department has opened a criminal investigation into the cell's alleged leader and three other suspected members on grounds of organizing and taking part in the activities of a terrorist community, according to the press center.

Daesh, a radical Sunni group banned in a range of countries including Russia and the United States, is notorious for its brutal tactics and extremist jihadist ideology. It has been successful it using online propaganda and social media for recruitment purposes, primarily targeting young people around the world.

Daesh has claimed responsibility for a number of major terrorist attacks, including those in Brussels and Paris.