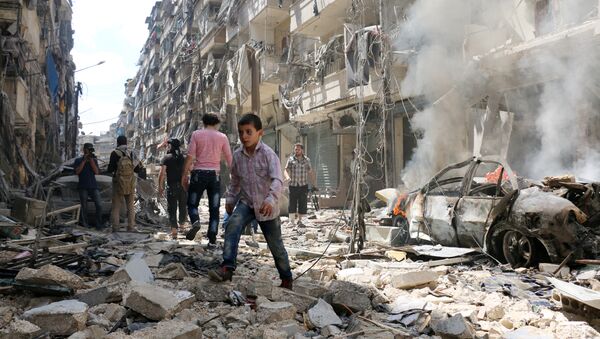 © AFP 2021 / AMEER ALHALBI
Subscribe
A joint task force has determined that defense intelligence appraisals provided by US Central Command systematically provided a distorted "rosy" picture, in stark contrast to battlefield realities, in order to create the false appearance that the US strategy in Syria and Iraq was succeeding.

On Thursday, a congressional joint task force (JTF) investigating allegations of intelligence manipulation at US Central Command (CENTCOM) issued a report highlighting systematic failures since 2015 with CENTCOM reporting and analysis of efforts to train Iraqi Security Forces and combat the Daesh extremist network in Iraq and Syria.

Notably, the report found that the intelligence products approved by senior CENTCOM leaders routinely provided a more rosy depiction of US anti-terrorism efforts than on-the-ground realities indicated, including appraisals that were consistently more positive than those produced by other agencies and departments within the US intelligence establishment.

The Joint Task Force, established by the Chairman of the House Armed Services Committee, House Permanent Select Committee on Intelligence, and the House Appropriations Committee’s Subcommittee on Defense,  determined that there were intentional efforts to manipulate and propagandize battlefield realities, possibly for the purpose of scoring political points in a heated election season. The committee was led by Congressmen Ken Calvert (R-CA), Mike Pompeo (R-KS) and Brad Wenstrup (R-OH).

The allegations laid out by the JTF are likely to be dismissed as a "partisan witch hunt" against the White House, but initial findings that electoral politics have resulted in the manipulation of America’s defense imperative is not an uncommon theme for US presidential administrations, and that of President Barack Obama is no exception.

Representative Pompeo, in a statement, took the Defense Department to task, observing that "the United States Central Command’s most senior intelligence leaders manipulated the command’s intelligence products to downplay the threat from [Daesh] in Iraq,” and argued that the fraudulently "rosy" claims of operational success "may well have resulted in putting American troops at risk as policymakers relied on this intelligence when formulating policy and allocating resources for the fight."

Alexander Mercouris, editor of The Duran and an expert on the Syrian civil war and the battle against Daesh, expressed his concern to Sputnik over the congressional findings.

"I think the point was to give the impression that the policy of supporting so-called moderate rebels in Iraq and Syria who were fighting [Daesh], was more successful than it actually was," Mercouris said.

"The Obama Administration announced this great policy that it would take on Daesh and defeat Daesh by bombing the terrorist group and supporting 'moderate' groups in Syria and Iraq to fight Daesh, but without supporting the Syrian government which was actually fighting Daesh. The result of that policy was a complete failure."

"Daesh actually increased its areas of control," he added, "capturing Palmyra, and there were reports that they would have captured Damascus last autumn if the Russians had not intervened."