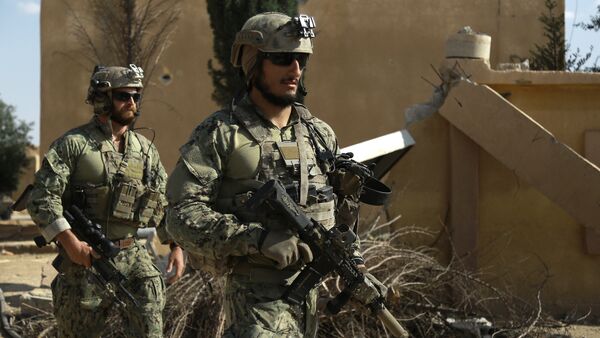 © AFP 2021 / DELIL SOULEIMAN
Subscribe
United States forces are fighting on the ground in Libya, providing support for local troops battling Daesh near the city of Sirte, according to an anonymous US official. Why should US troops keep a low profile, and why does the Pentagon continue to deny their presence?

The existence of US troops fighting on Libyan ground around Sirte has been denied by the US command. Small US Special Operations groups are operating around the Libyan city of Sirte, providing intelligence information and direct support for local Libyan fighters, and coordinating US airstrikes in the region.

According to sources cited by AntiWar.com, US special ops teams are working out of a joint operations center on the city outskirts. Their role is said to currently be limited to supporting forces loyal to the country's government.

The troops have established outposts, and built ties to various militant groups in attempts to identify potential allies, indicating that US intelligence assets, at a loss for clarity, are seeking additional information through the use of the military.

The US Special Forces are operating in a so-called low-visibility mode, to avoid being targeted as another Western intervention. Military incursions into Libya by foreign actors, notably those of the West, are highly unwelcome, both by people and the fragile government in Libya, as indicated by recent protests against French intervention in July.

Last month, French troops revealed their presence in Libya after several French soldiers were found dead near the city of Benghazi. The Libyan government demanded an official explanation from France following the incident, stating that they "completely reject this violation of Libyan soil."

The "low visibility" mode has apparently failed Western soldiers, as some US and British forces have reportedly been spotted earlier this week in Sirte. Local armed forces officials said they identified Western military personnel carrying radios and wearing black body armor and tan uniforms. The US Department of Defense subsequently denied the involvement of US Special Forces or other military personnel in Libya.

US Destroying Libya's Cities Without Plans to Rebuild, Support Government
The likelihood of a Western military presence on Libyan soil is reflected in the words of Mattia Toaldo, a Libya expert at the European Council on Foreign Relations. According to Toaldo, the US mission in Sirte is "different" from the French presence in the eastern city of Benghazi, as Libya's rival political factions are unlikely to object to attempts to defeat Daesh.

"As long as they keep this low profile… the risks both for the US and for the Libyan government are quite low," he suggested.

Libyan militia officials believe that the arrival of Americans and British near the front line signals preparations for a significant push into Daesh territory. The official US position says that Western involvement in the fight against Daesh-affiliated Islamic State in Libya will solidify the foundation of the current UN-backed government, following a period of political instability caused by the Western invasion of Libya and the assassination of its then-leader Moammar Gaddafi, which, according to the officials, "opened the door to the expansion of the Islamic State."