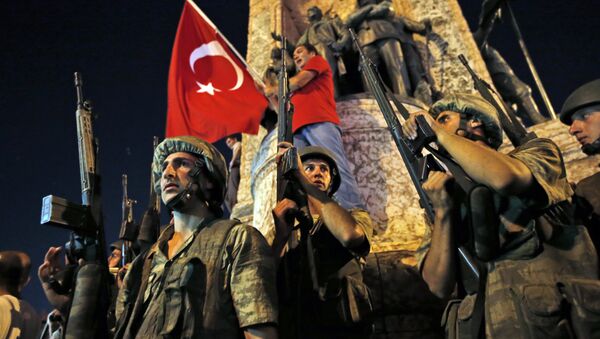 © AP Photo / Emrah Gurel
Subscribe
International
India
Africa
Mustafa Ugurlu, a Turkish Navy Rear Admiral serving at a US military base in Norfolk, Virginia, on behalf of NATO, is requesting political asylum in the US after an arrest warrant was issued for him in his home country.

According to the Turkish embassy in Washington DC, Ugurlu did not report for questioning when summoned by Ankara. The Turkish admiral’s request for asylum may further exacerbate tensions between Ankara and Washington that have been growing since Turkey demanded the extradition of exiled opposition leader Fethullah Gulen.

On Tuesday, the Turkish justice minister stated that if the US did not extradite Gulen, "it will have sacrificed Turkey to a terrorist."

Ugurlu is the first known Turkish military officer to request asylum in the US. His request comes alongside Turkey’s attempts to arrest and detain tens of thousands of people suspected of aiding July’s failed military coup that attempted remove President Erdogan.

An unnamed Turkish embassy official said that the warrant for Ugurlu’s arrest was issued after he failed to respond to a detention order: "On July 22, on that day he left his badges and his ID at the base and after that no one has heard anything from him." The official also indicated that two other low-level officers had been called back to Turkey, "But there's no detention order for them. One of them has gone back, and the other will go back shortly."

The Turkish military is NATO’s second-largest armed forces unit, and the recent purge has resulted in the discharge of thousands of officers, including 40% of the country’s military generals. Many suggest that Erdogan’s overhaul has gone too far, as it lacks parliamentary input.

The mission in Norfolk, where Ugurlu was assigned, is North America’s only NATO command. Norfolk NATO directs subordinate commands of the Allied Command Transformation, including the Joint Force Training Center in Poland, and the Joint Warfare Center in Norway.

An unnamed NATO official, also declining to comment on the asylum request, said, "Turkey has notified NATO about the changeover of a number of Turkish military personnel. There has been no impact on the implementation of NATO-led operations and missions or on the work of NATO commands."