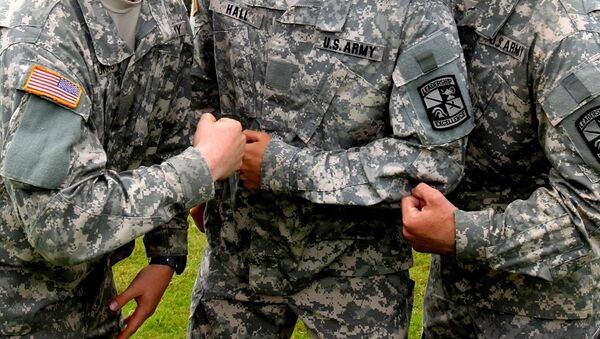 © Flickr / Army ROTC
Subscribe
International
India
Africa
As the obesity epidemic continues in the United States, the military is seeking new ways to determine whether or not soldiers are too overweight to serve.

Slippery Slope? US Army Cadets Ordered to Walk a Mile in Heels
A new policy is expected to be put in place by Pentagon officials later this year, which upends the standard “tape test” that measures body mass index. Instead, new technology will be put into use to distinguish between those who are obese and those, such as bodybuilders, who have nontraditional body types, but are fit for duty.

“When you have groups of individuals who are fit and highly trained, then BMI is absolutely useless,” Dr. Dympna Gallagher, director of the body composition unit at the New York Obesity Nutrition Research Center, told Military Times.

Currently, the military requires troops to maintain fat levels below 26 percent for men and 36 percent for women. The standards are currently shrinking the pool of potential recruits, as recent studies have confirmed that 75 percent of young Americans are ineligible for service because of their weight.

Not So Fat! Boeing Jets to Fly Shorter Distances Due to Passengers' Obesity
Instead, officials are looking to determine locations of body fat on an individual, to determine fitness levels.

“Is it visceral fat around the abdominal organs? Or is it total body fat?” a defense official who spoke to the Military Times on a condition of anonymity said. “So the goal is to try to determine, based on the science, how do you test — in hundreds of thousands of individuals — the type of fat they have, in a manner that is quick and attainable and is relevant to health?”

Some officials have expressed concerns that the military will be at a disadvantage on the battlefield if they lower standards through the use of the new policies. A study of troops in Afghanistan found that those who are overweight are 40 percent more likely to be injured while deployed.

“If we do that, we have a potential liability on the battlefield. The minute we lose that competitive advantage in combat because our enemies are training harder than we are, we’ll have more problems than we have right now,” Command Sgt. Maj. John Troxell said.