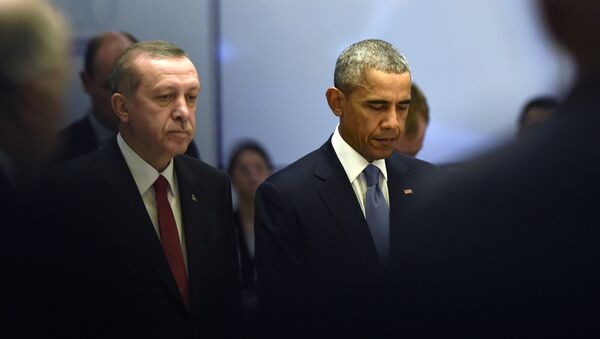 The host of RT’s flagship program CrossTalk says that while the possibility of an Erdogan pivot to Moscow exists, it is not expected in the near term.

On Tuesday, Turkish President Erdogan hailed the president of Russia, calling him my "dear friend Vladimir," in a capitulation of his earlier stance toward Russia, when Ankara refused to apologize for downing a Russian attack aircraft along the Syrian-Turkish border. Russia stated that the TU-24 bomber never entered Turkey’s airspace, while Ankara claimed that the aircraft entered a few meters into Turkish airspace for approximately 16 seconds.

After the downed pilot was murdered by Syrian fighters on the ground, border relations between the two countries worsened, with Erdogan refusing to apologize. A fracturing of ties between the two countries quickly arose, resulting in, among other shifts, a ban on Russian tourism and an end to the importation of foodstuffs, both big-money tickets for Turkey’s economy.

But a lot has happened since November 2015 — most notably a failed July 15 coup attempt in Turkey.

The Erdogan Administration has since alleged that the United States played an active role in the coup attempt, with Erdogan hinting that his former ally and current arch-nemesis, Fethullah Gulen, was a "pawn" in US military and intelligence operations. Turkish newspapers have gone one step further, publishing pictures of a top US general under the headline, "The Man Behind the Coup."

Erdogan’s belligerent tactics have made himself a source of scorn for many in Europe. The increasingly authoritarian Turkish president demanded that the EU-Turkey refugee deal, critical to political stability in the European Union, be contingent on the streamlined accession for Turkey into the EU, as well as insisting on visa-free travel for Turkish residents within the Schengen Area by October. European leaders are increasingly unwilling to accept these demands, citing human rights violations both before the coup attempt and in a post-coup purge, suggesting that relations between the two are likely to worsen.

On Wednesday, Loud & Clear’s Brian Becker sat down with RT’s host of CrossTalk, Peter Lavelle, to discuss the implications of the post-coup political terrain and how a Turkish-Russian reset may play out under prevailing winds that have pushed Ankara further away from the West.

​Do discussions between Erdogan and Putin mark a reset between the countries?

"My major takeaway from all of this is that Erdogan knows that he has a number of options in front of him, because he has shown a willingness to reset relations with a number of countries, and maybe to look differently at the West, and I think — with the attempted coup and all of the murkiness around that — it has influenced his thinking," said Lavelle.

"The military made it very obvious to Erdogan that Turkey does not need bad relations with Russia, because Erdogan would find himself isolated again, like he did with the crisis in Syria," said the RT host. "Erdogan is taking virtue from necessity here, and the Russians are more than willing to reach out a hand here. Both countries are looking at their national interests, and we can look at Erdogan and Putin, but both countries have an opportunity."

"Everything is possible right now, and I think that is what both of these leaders are saying to their domestic audiences, and sitting across from each other on each side of the table. It is a very interesting time, but I don’t think we should be rash in drawing any conclusions," said Lavelle.

Will Turkey drift away from NATO and the EU toward Russia?

"I think what Turkey is going to do, which any rational power would, is to play off different players to get what it wants most, and that is perfectly natural," said Lavelle. "The Russians are perfectly aware of that. Turkey will not leave NATO anytime soon, but will it leverage its membership to get certain things that it wants regionally? Of course."

"I don’t see any black and white that they will completely turn their back on NATO and the European Union, and fall into some kind of Eastern orbit with Russia, China, and Iran," said Lavelle.

"It could happen at one point," he suggested.