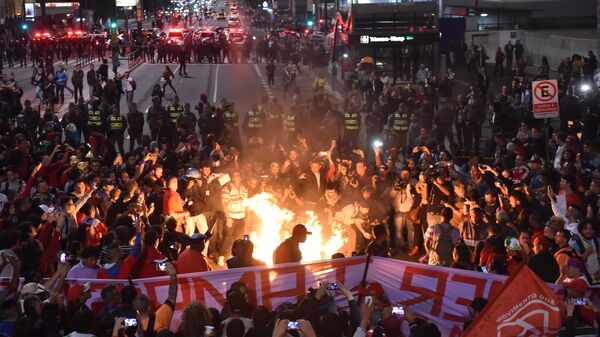 The "impeachment" coup of democratically elected Brazilian President Dilma Rousseff, at the behest of politicians who are themselves implicated in a major corruption scandal, could lead to a people’s revolt within days of the closing of the 2016 Rio Olympic Games.

On Wednesday, the Brazilian Senate voted to hold an impeachment trial for democratically-elected President Dilma Rousseff, ushering closer the possibility of her permanent ouster from office, with the unpopular Michel Temer, a man with a disapproval rating in excess of 80%, being forced upon the Brazilian people against their will.

The 68-year-old Rousseff is a rarity in Brazil, one of the few politicians not implicated in a major corruption scandal. Dilma’s persecutors, Michel Temer and the Brazilian Democratic Movement Party, by contrast, are at the heart of the so-called car wash investigation, with leaked recordings exposing the impeachment process as a bid to install Temer in the interim to make corruption charges disappear.

Despite growing public unrest, Rousseff’s fight for her political career appears increasingly futile, with the Brazilian Senate, by a vote of 59 to 21 (with one abstaining), approving the commencement of a full impeachment trial against the elected official by a margin substantially greater than the 50% plus 1 required.

If two-thirds of the Brazilian Senate, or 54 senators, vote for impeachment following a trial set to begin on August 25, just four days after the Olympics closing ceremony, the politician will be permanently barred from office. The impeachment trial is expected to last five days, possibly ending her career before the close of August.

"Today is not a good day for our democracy," said Senator Paulo Rocha. Against her "is a political alliance that smells of a coup."

The accusations of a coup trace back to the commencement of the proceedings in the lower house, by the notoriously corrupt lawmaker Eduardo Cunha, who was eventually ousted pending corruption proceedings of his own.

With outraged people in Brazil taking to streets in front of Olympics events chanting "Fora Temer" (for "Temer Out"), the Rio Games have brought into the living rooms of the world the reality of the slow-motion South American coup.

On Tuesday, Loud & Clear’s Brian Becker sat down with Brazilian political analyst Victor Fraga, and Aline Piva, of Brazilian Expats for Democracy, to discuss what to expect.

​"People are outraged, people are furious, people want the reactionary interim President Michel Temer out. However, politicians, including in the senate, and most importantly, the supreme tribunal, have implemented a juristocracy in Brazil where they disregard the will of the people and act according to their own interests," said Fraga.

"The interim president has a disapproval rating of over 80% and the media has been doing their utmost to disguise that and to lift the mood of the country," stated Fraga. "Jingoism has all of a sudden swept the country, and the reactionaries want to benefit from the jingoism and patriotism surrounding the Olympics in order to lift the mood, disregarding the fact that the Olympics were brought to Brazil by Lula and the fact that the opening ceremony of the Games has been a success, boils down to Dilma."

"To add insult to injury," he said, "they have been trying to silence people in the stadium and have been trying to prevent them from protesting or holding very simple signs saying 'Temer Out,' in an affront to free speech and democracy while shredding the Brazilian constitution to pieces," said the analyst.

Piva agreed, noting that the mood in Brazil is one of anger and outrage at the stripping away of the democratic process for the benefit of a powerful and corrupt few.

"What you are seeing now in Brazil is that, for the first time, people who never had a voice, who never spoke out about what they were feeling, and thought about in politics, and what happened in Brazil, are now taking to the streets to show their discontent," said Piva.

"It is important to note that the Brazilian media has played a big role in pushing this idea that Brazil was once an ideal country of harmonic societies that has now become polarized and it is not something that is happening only in Brazil," said the activist. "It is happening in Venezuela, it is happening in Argentina, so this is one of the faces that the media takes, in order to undermine the progressive governments in Latin America, and to put our achievements over the last decade on the backburner."