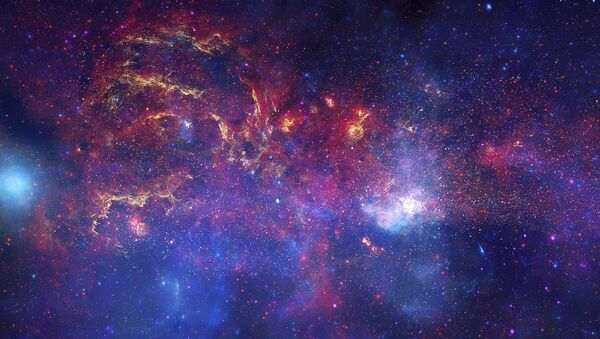 10 years after its first discovery what do we really know about the Milky Way's so-called Dark Zone? Sputnik caught up with Professor Mark Morris from the University of California Los Angeles (UCLA) and discussed the latest developments around the research that his team conducted in 2005.

In 2005, Professor Mark Morris and the NASA Observatory discovered a swarm of 10,000 or more black holes that were orbiting the Milky Ways supermassive black hole.

​These would represent the highest concentration of black holes anywhere in the galaxy. These relatively small, stellar-mass black holes, along with neutron stars, appear to have migrated into the Galactic Center, over the course of several billion years.

Professor Morris said that the idea there is a dense cluster of thousands of stellar-mass black holes and neutron stars orbiting around the central black hole has gained considerable traction and is now regarded as being likely.

​"They are difficult to detect because they are dark, for reasons explained later on. So aside from the transient X-ray flashes that were reported in 2005, and others have been seen since, there are no easy ways to actually observe the black hole cluster," Professor Morris told Sputnik.

​"This entourage of massive bodies swirling around the central supermassive black hole can have an important effect on how the central black hole is fed, and therefore how fast it grows."

The area was nicknamed the 'Dark Zone' after the discovery in 2005. Professor Morris said the name came into existence as black holes can normally be seen by detecting the hot, radiating matter falling into them, but the black holes buzzing around the central supermassive black hole of our galaxy are moving too fast to capture enough matter to illuminate them.

The supermassive black hole can be viewed with radio waves, infrared light, and X-rays because it is sitting fairly still and accreting enough material to shine at these wavelengths.

"The Dark Zone name hasn't been widely adopted — I think some journalist came up with that. Indeed, there are vast numbers of stars that are present in the same zone as the putative black hole cluster, so the region is in fact quite bright. That said, our UCLA group has found that the distribution of stars around the central black hole is not as concentrated as theorists had expected.  It is possible, then, that the black hole cluster is playing some role in excluding some fraction of the normal stars from this central region," Professor Morris told Sputnik.

​So why are this discovery so important? Black holes are a predicted manifestation of Einstein's General Theory of Relativity, so they provide a marvelous demonstration of the validity of that theory.

"The theory of relativity occurred to me by intuition, music is the force behind this intuition”–Albert Einstein pic.twitter.com/mH1SFfChPv

​However, many alternative theories have been proposed, and the space-time around black holes can be quite different in the different theories, so studying them provides a fundamental way for scientists and humanity to uncover the most correct description of nature.

​Professor Morris said that besides black holes, neutron star remnants are also hypothesized to be present in the cluster.

They are probably not quite as massive as the black holes, but they could be easier to see because neutron stars are sometimes manifested as pulsars, which can be seen as radio sources. For technical reasons, pulsars in the galactic center are difficult to detect, and until a few years ago, none had been found close to the central black hole.

​​"In April 2013, one of the neutron stars underwent a tremendous outburst. It turns out that it was a magnetar, a highly magnetized neutron star, that is known to produce such outbursts on occasion," Professor Morris told Sputnik.