Paradigm Shift: Europe's Infatuation for US Democrats Comes to an End 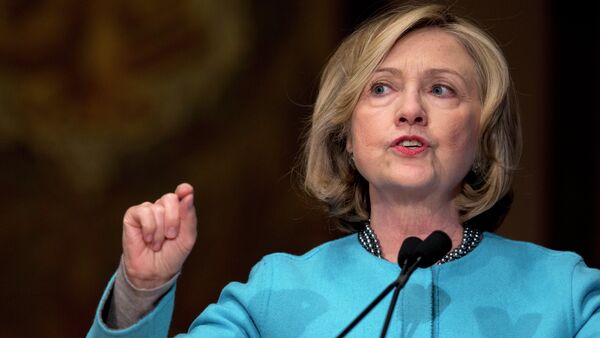 As for the United States leadership, the Europeans' sympathies normally rest with Democratic presidential candidates who are traditionally regarded as more peaceful and reliable than their Republican counterparts. In the upcoming election, however, there are things that may tip the scale in favor of the Republicans.

Clinton’s 'Super Hawkish' Stance Will Only Extend Syrian War
In Sweden, like its other EU peers, the mainstream media keep touting Hillary Clinton as the preferred candidate, through incessantly painting her Republican rival Donald Trump as an "oddball" and "madcap." Swedish newspaper Skånska Dagbladet obviously went against the flow as it took a stand against the aspiring Democratic president. According to Skånska Dagbladet's editor-in-chief Lars Eriksson, Hillary Clinton makes Nixon look like Mahatma Gandhi.

By his own admission, Eriksson himself normally would support the Democratic Party, as its presidential candidates used to be more concerned about the welfare system and were less belligerent. Fittingly, many pinned their hopes on Barack Obama as a "peace president," but the situation only grew worse in comparison to the Bush years.

"During four of Obama's years in office, the United States had a disagreeably warmongering state secretary in the person of Hillary Clinton, who shares a huge joint responsibility for the continuing chaos in Iraq, the disintegration of Libya, the civil war in Syria and the refugee disaster that followed. To top it all, today there is overwhelming evidence of how the US contributed to the emergence of Daesh," Eriksson wrote.

Lost Continent: Bitter End to Obama's European Romance
"The possibility of the US to get a warmongering president like Hillary Clinton, who also seems to be completely devoid of self-criticism, is a very daunting prospect. No wonder that the US military-industrial complex gives her such a massive support," Eriksson noted.

Eriksson also pointed out that Europe risks huge refugee flows in view of uncertainty in Turkey as well as the US' and EU's attempts to destabilize Russia after the coup in Ukraine, where the democratically elected president was forced to flee. According to Eriksson, a civil war in the mid-Eastern nation of 75 million, which currently serves as a barrier for the migrants, would spell doom for Europe. The same applies for Russia, which is being baited by Washington's bizarre provocations, such as placing arms near the Russian border.

"In the late 1990s, there was reason enough to be optimistic about the world's future development. The collapse of Soviet communism made Eastern Europe democratic. After the chaos of pure predatory capitalism in Russia, a strong and determined president in the person of Vladimir Putin emerged, who bet hard on economic growth and peaceful co-existence. Today, only rubble remain of this bright future," Eriksson wrote, citing American hostility.

Norwegian Networking: Oslo Greases Clinton Foundation With Lavish Gifts
According to Eriksson, the Republican line-up for this year's presidential election was initially more hopeful than the Democratic one, with Hillary Clinton being the tipped favorite from the start. However, hopes for a peaceful development have now faded away by reason of "Trump's gaffes," despite his sharp criticism of Obama's and Clinton's "dangerous foreign policy," he noted.

"Today, Hillary Clinton, known for both her choleric temper and trigger-happiness that may get Nixon to appear as Mahatma Gandhi, looks like the likely winner," Eriksson pointed out.